By mid-afternoon, the green vinyl of the kitchen floor was beginning to show through. The refrigerator was nearly empty. "How am I supposed to get dinner for Milton tonight?" barked Martha crossly, as containers of spoiled Chinese carry-out, stale pizza and frozen blocks of ancient casseroles were being heaped in the dumpster.  Emily waved a gift card for "Farmhouse Kitchen" in Martha's sullen face. "Didn't I tell you?  As a reward for all your good work today, you and your husband will be eating out tonight."

Martha grimaced.  "We've been there. The food is greasy and they gave me a dirty fork once."

Emily sighed. Her blouse was spattered with green spots and something--a wad of school glue?--was stuck in her hair. She was alone with her intractable clients and she was already tired of them. Dr. Thimble had left this morning after only an hour, promising to check in at the end of the day. To Milton, almost every item was a "maybe." So far the truck held only the sagging frame of a shattered mirror, a ripped-open cushion where a mouse had birthed a litter of mouslings, a dozen mildew-spotted books and a baseball camp that said "Sparky." The front yard was cluttered with broken chairs and non-working lamps, but Milton would part with none of them, saying he'd fix them when he found time.  Martha told the crew to return the chairs and lamps to the house because it looked like rain.  As if Martha's bossiness wasn't irritating enough, Beatrice and Bunny arrived.

"Mom!" Beatrice exclaimed. "Why are you doing this now? You said you'd wait until the condo was ready. We need time to decide what we're taking."

The twins, who had just turned 40, wanted their old bedroom furniture for their new place, which was still under construction.

"It was your dad's idea, not mine," said Martha.

"Geez," said Bunny, "I hope you didn't throw out my dresser lamps. I'll die if anything happens to those pink organdy shades."

"The crew is not going upstairs until tomorrow," said their mother.

Milton hung up, gloomily picturing the oaks in his front yard coldly evaluating all the stuff in his house in their new role as "decision trees."  Monday was too soon. "Dr. Thimble isn't even giving me time to get organized," he moaned.  He pictured a corps of masked aliens in green jumpsuits, swarming through his house with a prurient interest in his things, while the trees in the front yard waited to be called upon to render decisions. He felt panic, then fury.

"Guess they'll be here Monday morning," he said, keeping his voice even.

Monday came and things didn't go well.  Martha eyed Dr. Lessing warily. Why did Dr. Thimble think they needed her anyway?  They were already paying him plenty. His job was easy enough. He was supposed to tell Milton what to do and then see that he did it. Here was this naive young thing trying to take charge. Martha didn't like the way she asked Milton's permission to tour the house, as if the house belonged only to him.  After poking around longer than Martha thought necessary, Dr. Lessing hugged them both and said, "We can do this!  Let's gather everyone out in the driveway."

Milton looked as if he were about to cry.  Dr. Lessing, who now wished to be called Emily, hugged him and said, "Remember, Milton, it's a process.  You always have the final say. About five years ago, our younger daughter suggested we both write a short story. She'd found an online site that provided opening lines of stories to help you get started. That day's opener is in bold print below.  I don't know what became of her short story, but I hung on to mine. I'm sharing it now, in four parts.  I hope you'll like it.
He looked at his phone, turned pale, then quickly left the room. She watched him, smiling.  She felt a small ping of happiness at the sight of his distress.
"Lighten up," she called after him cheerily. "It's only Dr. Thimble. There's nothing to be upset about. Just answer the damn phone."
They had been seeing Dr. Thimble for nearly three months.  It had been her idea. Milton wanted things to stay the way they were.  During their sessions, he often felt cornered by the two of them.  The previous week, Dr. Thimble finally asked Milton if he wanted to save his marriage. Milton appeared to be lost in thought until he sensed Martha's wrathful glare. He mumbled, "Uh, yeah, sure."  He sat up straighter in his chair and tried to look amenable, all the time picturing how much fun it would be to stop at the "Fifty-Family Yard Sale" on the way home.
"So you agree that the condition of your house has become unmanageable," Dr. Thimble was saying.
"Uh, yeah, I guess so," replied Milton.
"And you say you are ready to get help in managing the problem," Dr. Thimble went on.
"Uh, yeah, probably."
"Then let's get started.  I'll contact a company I work with and get back to you.  How does that sound?" asked the psychologist. Milton saw that Martha was beaming and shifted uneasily in his chair.
"Yeah, sure, OK."
So now Dr.. Thimble was phoning to say that he had hired "The Junkers" to haul unwanted clutter away.  They would arrive at 9 AM on Monday morning. Dr. Emily Lessing, an expert on "decision trees," would accompany them.
"So we'll see you early Monday morning," chirped Dr. Thimble brightly. "Have a good weekend."
Posted by Cynthia at 7:52 PM 8 comments:

Dances with the Maryland Department of Motor Vehicles 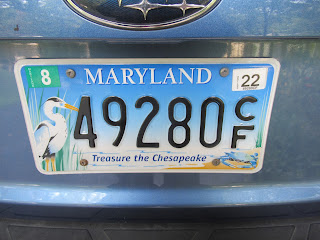 Email ThisBlogThis!Share to TwitterShare to FacebookShare to Pinterest
Labels: Hassles of Modern Life 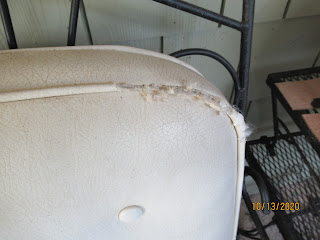 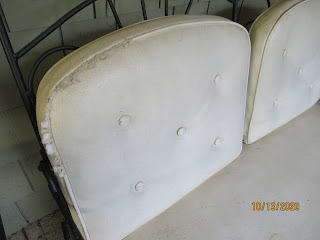 This summer the squirrels began chewing the welting on our porch furniture. We've had this furniture for 20 years. Mom must have brought it with her when she moved in with us in late August, 1999. I had them reupholstered in white vinyl. The squirrels left them completely alone until this year, which has been a mystery to me. Why are they destroying them now?
I realize that Phil has increased the number of bird feeders on the porch, and feeders attract (and often frustrate) squirrels. Some of them never stop trying to figure out how to access the seeds, but it's not that easy. Perhaps they're venting their anger on our furniture.
Posted by Cynthia at 7:14 AM 14 comments: 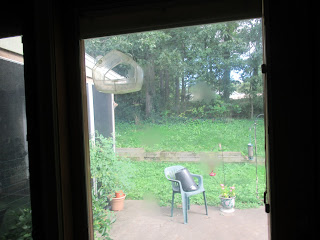 Do you see the window bird feeder attached to our patio door?  One dark night not long ago, the patio door was marked by the tell-tale silver trail of a slug, which was crawling up the glass, making his way to the feeder. How did he know that his laborious journey would pay off with a feast of birdseed? Who knew that slugs even like bird seed?  After the slug had been feeding for awhile, Phil removed him and put him on the grassy hill beyond the patio to continue his slugly life. (You wouldn't say that such a determined creature lived a "sluggish" life, would you?) A few days later, he crawled up to the feeder again for more seeds, but after that, we never saw him again.

Which reminds me of a cartoon I saw in The New Yorker magazine. A snail climbs slowly up the exterior of a house and rings the doorbell.  The man who answers the door is pretty annoyed when he sees it's just a snail that's brought him to the door. He snatches him off the doorbell and flings him as far from his house as he can.  The snail picks himself up and begins slowly making his way back to the house. Once again he climbs and rings the bell. When the man answers, the snail indignantly asks, "What was that all about?" 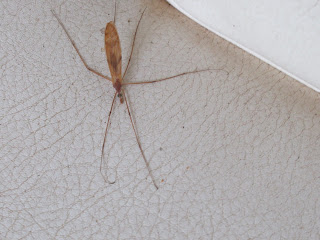 This is an unusual bug we saw on our porch furniture.
Posted by Cynthia at 9:22 AM 9 comments: 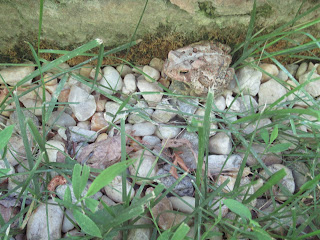 For the first summer in several years, we had a resident toad. He hung around in the back yard near the water faucet and under the Joe Pye Weed. 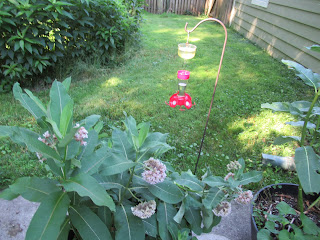 From May until the middle of September, hummingbirds visited our feeders. We had a feeder in both the front and back yards. I made hummingbird nectar myself and changed it every 3 or 4 days. 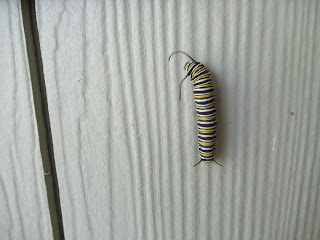 We planted milkweed in our front yard. It's an aggressive plant. It looks reasonably attractive as long as baby monarchs don't nibble on it, but why would you plant milkweed if you weren't interested in attracting monarch butterflies?  For the longest time this summer, there was no sign of egg-laying monarchs. Late in August, we saw a few. Then the milkweed began to look raggedy and soon we spotted a caterpillar or two crawling up the walls of the porch. Chrysalises began to appear here and there. Some were in unusual places, such as under this bench.  Phil saw these two emerge from their chrysalises late one chilly summer night. They stayed under the bench like this all night. The next day, when it warmed up a bit, they took off. I hope they made it to Mexico. 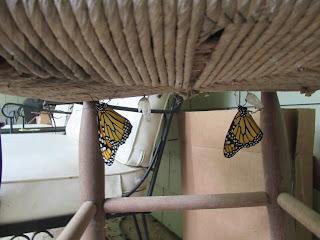 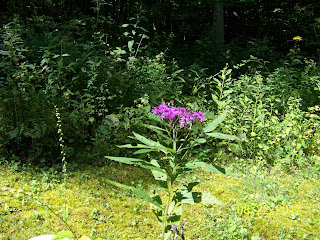 We have an ironweed in our backyard, transplanted from our place in Ohio. It's OK. It's "native" to Maryland as well. 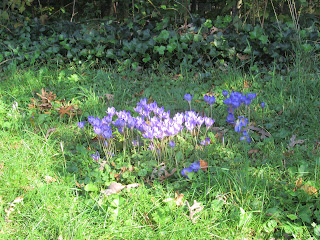 Our back and front yards have autumn crocuses. They probably aren't native to Maryland, but they're so beautiful I'm not going to fret about that too much.
Posted by Cynthia at 11:27 AM 9 comments: 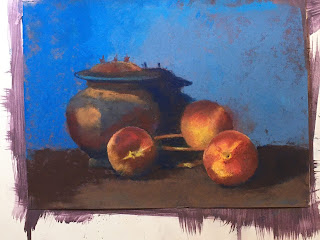 My sister started art lessons late in life. First she tried pen-and-ink drawings. Then she did botanical sketches in colored pencil. After that, oils. Now she's in her pastels period.

About this picture she said, "Peach fuzz makes it difficult to capture the roundness of peaches because peaches don't shine."  Who knew?