My Sister, the Artist

Some of my sister's pastels will be shown at the Old  Town Art Center in Chicago from early December through mid-January. I saw some of her work last summer. She's good.

Clicking on the picture will enlarge it and give you the gallery address and hours. Winter is a great time for "chasing light."
Posted by Forsythia at 12:45 PM 4 comments:

Email ThisBlogThis!Share to TwitterShare to FacebookShare to Pinterest
Labels: Family

She turned 49 yesterday, our baby girl. How can our child be 49?


She was born in Pasadena, CA on November 19, 1963. Her dad and I walked into Huntington Memorial Hospital on a sunny Tuesday morning, giddy with anticipation. Three days later, the sky darkened.

Back then, new mothers stayed in the hospital longer. On Friday morning, those of us who were going home on Saturday, gathered in a small conference room to watch a movie on bathing the baby. We waited, but no one came. Finally, we  heard a commotion in the hall. The President had just been shot in Dallas.

The hospital staff continued to function, but a stunned silence settled over the hospital. Toward evening, an aide shuffled absently into our room and changed the sheets for the second time that day. She seemed to be sleepwalking. Before lights out, the nurse tried to comfort my roommate and me.   "Now I don't want you girls to worry," she said, " the Kennedys have plenty of money."

Email ThisBlogThis!Share to TwitterShare to FacebookShare to Pinterest
Labels: Family, Our Country

I am so proud to be a Marylander this morning. Yesterday, voters upheld Maryland's same-sex marriage law, making it legal for gay couples to marry as of January 1, 2013. We also approved the Dream Act, allowing undocumented immigrants to receive in-state college tuition rates. And we helped give Obama a second term.  YAY!
Posted by Forsythia at 7:37 AM 6 comments:

Email ThisBlogThis!Share to TwitterShare to FacebookShare to Pinterest
Labels: Something Wonderful 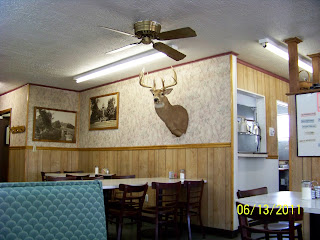 Every time we're in Ohio, we always have to go to Peggy Sue's for pie. Peggy Sue's is a little restaurant on Route 36 in Newcastle, a tiny rural town. There's lots of home-cooked comfort food on the menu, including a reasonably-priced BLT sandwich and the best banana cream pie this side of heaven. If someone presented a piece of Peggy Sue's pie to Saint Peter, he'd take one look at this creamy confection with its mile-high cloud of whipped topping and close the Pearly Gates for lunch. Banana cream isn't the the only pie on the menu, which is posted on the whiteboard in the photo, but it's my forever favorite. On one visit, I held open the door so that a man and his little boy could go in ahead of us. The child ordered the last piece of banana cream pie. I don't even remember what I ordered instead, but I was very disappointed, especially when I noticed that the boy ate only half of his pie. My husband always has cherry, blackberry or apple.  The waitress brings a generous piece, offering to warm it up before serving it with ice cream on the side. They treat you like family at Peggy Sue's.


The decor is "modern diner" set off with mounted deer heads. The deer in the photo keeps company with several others on the opposite wall.  One blustery day in early February, which was the last day of deer season,  we were the only two customers in the place not wearing camouflage.

Going west on 36 toward Mount Vernon, we pass the Fox Hole, a decrepit-looking BYOB place featuring topless dancers. Although members of a local church once filled the parking lot in an attempt to discourage the goings-on, the entertainment industry may offer some local ladies their only opportunity for employment. I just don't know.

Further west, a farmer set up a series of large signs four years ago alleging that experts had determined that Obama's birth certificate was a forgery and blasting congress for not  booting the foreigner out of the White House.
Posted by Forsythia at 2:34 PM 1 comment: