Did Vivaldi Have Red Hair?

Yesterday I could have sworn they (WETA-FM) said, "And now a concerto from our favorite redneck, Antonio Vivaldi."

They must have said "redhead."

My Last Word on Femurs and Fosamax

I don't want to give people the wrong impression. I  just don't know that Fosamax is wrong for everyone. It might even have been good for me, at least for a short period.  To sum up:
*Some doctors now advise patients on Fosamax to take a "vacation" after they've been on the drug for 5 years. Reason: Fosamax has a half-life of 10 years. This means it stays in your body after you stop taking it. It looks like you derive no additional benefit from taking it longer than 5 years.
*However, 5 years is not a magic number. Some femur fractures occur earlier than 5 years, but most femur fractures occur in women taking bisphosphonates (Fosamax, Boniva, Actonel, etc.) for 8 years or longer. (I took Fosamax and alendronate sodium, its generic, for nearly 10 years.)


*A blood test after 4 or 5 years can determine whether your bone-turnover markers are normal or whether the bisphosphanate you've been taking has shut the process down.

*Complain loudly to your doctor if you have persistent thigh pain.
*Be very wary of taking Fosamax for osteopenia. For an alarming report on the agressive marketing of Fosamax, see How A Bone Disease Grew To Fit the Prescription on NPR. My sister took Fosamax for over four years for osteopenia and ended up with a fractured left femur and a hairline crack in her right femur, which was "rodded" before it could break completely.

*Don't take my word for it. Search the Internet  using the terms "Fosamax" and "femur," and you'll pull up oodles of press articles and notices of lawsuits galore. Also, check out a report called Drugs Causing Bone Breaks? on http://my.msn.com/.

'Nuff said. It's been nearly three months since my fracture. I'm doing well, with minimal pain and stiffness. I waddle all over the place and climb stairs, albeit slowly.  I plan to continue physical therapy for another month. I now have an exercise bike. The surgeon tells me it takes a year for my type of fracture to heal completely, but I think I'm on track. 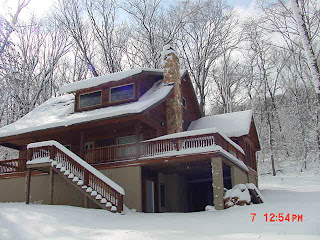 On Saturday, January 30th, we set out for "the far-off province of Ohio," as they call it in The King and I. We knew there'd be some snow, but we didn't think it would amount to much. Silly us. It fell mainly in Maryland, getting heavier as we headed west. More than once my husband asked, "Do you think we should turn back?" We both wanted to keep going, so we did.  On the other side of Uniontown, PA, the snow stopped. Once we were at the cabin, we could see that it had snowed there sometime during the past week, but it wasn't as deep as it is in the photo. The photo was taken on February 7th by a Knox County neighbor, after we were back in Maryland.
We went to our cabin in mid-winter so that we could attend the 66th annual Raccoon Dinner sponsored by the Danville Lion's Club. It's a major community fundraiser that's always held on the first Monday in February. As I said to Phil, "I come for the cake." For dessert, you can pick out your own piece of homemade cake. Every year they give a prize to the person who has traveled the farthest to feast on raccoon. We've never won. Last year, the winner came from Russia. This year, from Egypt. How can anyone who drives a mere 385 miles from Maryland compete with that?
On Tuesday, we started home. Just over the Maryland line,  we ran into another snowstorm. The road (I-68)  all but disappeared at times. The trip took 12 hours!
On Friday night, the Big Snow began. It snowed all night and all day Saturday. We ended up with 21 inches from that storm. Church was canceled on Sunday. Sunday morning, Phil began shoveling. Our daughter, Becky, called, complaining of a cough, pain in her chest, and a high fever. She'd been sick for several days, as had their nearly-two-year-old son, Nathaniel, He was getting better; she was getting worse. She needed to go to the emergency room. The ambulance could not go up their street, so a fire truck came instead, to take her to the hospital.  Nathaniel put on his "I-don't-know-you, but-even-if-I-did, I-don't-think-I'd-like-you" face when he saw all the firemen. When they all trooped out to the porch to discuss logistics, Nathaniel firmly shut the door behind them.  In spite of that, they took his mommy away.
At the hospital, they said she had pneumonia and gave her a prescription. By this time, I had hired some men to finish shoveling the driveway. Phil drove to the hospital in our 4WD Subaru on barely-cleared roads, took Becky to pick up her prescription, and drove her home.
Every thing was shut down on Monday. On Tuesday, Phil drove me to Silver Spring for a long-overdue dental appointment. The roads were a mess, rutted and slippery. It took us an hour to get out of Laurel, but once we were on I-95 and the Beltway, there were no problems.
The snow started again (this time it was a major coastal storm) Tuesday night and blew and blustered all day Wednesday. It finally stopped last night. We've had a total of 3 and 1/2 feet from both storms.
It's Thursday. Choir is canceled tonight, and maybe there will be no church again on Sunday. Phil hasn't been to work all week. He is once again shoveling the driveway. The sun is shining. Our son-in-law picked up a few things for us at the store and dropped off Andrew, our 7-year-old grandson. He and his grandfather will go sledding this afternoon.  Who knows what the roads will be like tomorrow?
Oh, to be more like Georgie, our cat! Although blowing and drifting snow kept her from pursuing her favorite activities on  "her" screened porch this week, she quickly found a new way to have fun. 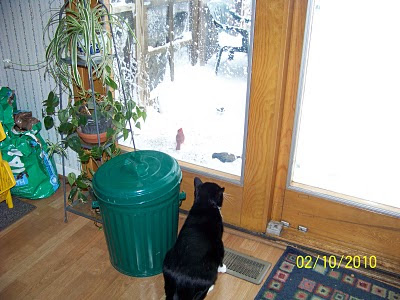