We live in a subdivision of cookie-cutter houses in South Laurel, called "Montpelier." There are many well-manicured lawns--not ours!!--with beautiful flowers. Some may say we fuss too much over our yards, but untamed nature carries on despite our efforts to shape and control the natural habitat.

We saw a groundhog trundling along our backyard retaining wall.

Last week a fox kit appeared beside the Japanese stone lantern in the yard down the street.

The neighborhood coyote has been been caught on film as he's made his rounds.

A doe and two fawns recently came to our yard to feast on persimmons from our curbside tree.  They paid little attention to passing cars.  After eating some fruit, the mother suddenly bolted toward the neighbor's back yard and her girls followed.

On Monday, I raised the garage door and startled a hawk that had been roosting in our beech tree, assessing the birds at the feeders and in the birdbath as likely dinner prospects. This time he flew away, but we've seen him other times loitering under the bushes close to the feeders.

On Tuesday, driving down Montpelier Drive, I saw a little blue heron coming in for a landing at the brook. This narrow brook, which runs behind the house on the corner, doesn't seem grand enough to be the home of such an impressive bird, so he may not be back. Still, who knows?

The Last Monarch of Summer

We raised 11 mail-order monarch butterflies this summer.  After they flew off, we were delighted to find a half-dozen wild caterpillars on our milkweeds. We waited for them to build chrysalises in our front yard, but one by one, they disappeared. We were so disappointed, and that's when we found out from some members of "The Beautiful Monarch" group on Facebook that we probably should have brought our wild caterpillars into the house to raise.

Then, on September 20th, I spotted a chrysalis on our front porch, near the ceiling. If that was the holly-bush caterpillar, he'd made quite a journey. 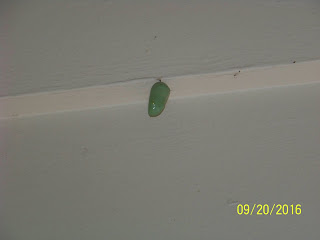 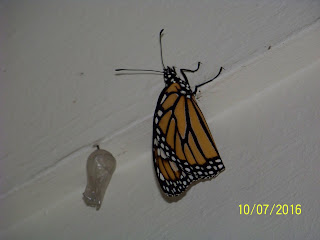 Ten days passed. Nothing happened. It had been cool and rainy, so we were afraid this little guy was never going to emerge. Then, two weeks after the chrysalis appeared, it began to darken, a welcome sign that a butterfly was on its way. Finally, around 7 AM on October 7th--again, it was cool and rainy--the butterfly emerged. He sat absolutely still for three hours. He was still perched motionless when I left the house after 10. When I got home around 2, the sun was shining and he was gone.

With Hurricane Matthew battering the east coast,  I hope he takes the inland route to Mexico.
Posted by Cynthia at 3:54 PM 3 comments: