Am I Being Stalked?

I think I am being stalked. Electronically. Yes, I know about cookies, and maybe this is just a coincidence, but hear me out.


The Tree Hugger keeps his aquarium stuff on a low, square table. It's a flimsy, wooden thing, over 30 years old, veneered with deteriorating white plastic. This table fits the available space perfectly and it "works," but still, it's ugly and it could collapse tomorrow. I searched the internet for a possible replacement, typing the words "end table" in my browser window. I didn't find anything I liked, so that was that. I thought.
Ever since then, ads for end tables have been  popping up everywhere. If I visit a blog that displays ads,  I'll see "Sale on End Tables", no matter what kind of blog it is otherwise.  On August 3, I printed a map of Germany off the internet. I just noticed the tiny print at the bottom of the page:  "End Tables on Sale 20%-50% off All End Table Styles Lowest Prices + Free S/H HomeFurnitureShowroom.com/EndTables.
Posted by Cynthia at 9:02 AM 5 comments:

Email ThisBlogThis!Share to TwitterShare to FacebookShare to Pinterest
Labels: Why?

We heard on the radio this morning that the "School Without Walls" was closed due to earthquake damage.
Posted by Cynthia at 9:24 AM 1 comment: 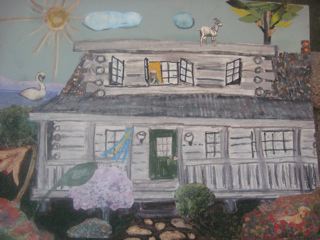 While our daughter and family were visiting my sister and husband in July at their vacation house on Lake Michigan in Door County, WI, Becky made this whimsical collage for them as a thank-you. Our three-year-old grandson, Nate, looks out a bedroom window.  Lucy, Barb and Ron's Golden Retreiver, lolls in the flower bed. The Swedish flag fluttering on the porch hints of treasures within, including an antique bride clock and a red-painted Dala horse. The single swan on the water stands for the flotilla of swans that  passed by during the week. And the goat on the roof? He's advertising Al Johnson's Swedish Restaurant and Butik (boutique) in Sister Bay, where a herd of goats enjoys salad on the roof most every day.

Andrew and I were in the gift shop at the National Aquarium in Baltimore, when suddenly the glass trinkets and jewelry began to dance. Unlike many Washington-area residents, who automatically thought "terrorist attack" when the building started shaking, my first thought was "earthquake."  It was only a few seconds later that I began thinking that maybe a plane had flown into the Aquarium's glass-pyramid top or that the building had been rammed by a ship.  Whatever. The staff told everyone go outside immediately. The quake was certainly a conversation-changer between Andrew and me about buying a $35 amphibious shark  that goes "anywhere you want, on land or in water."
Once outside, we passed a cluster of Aquarium employees, probably from food service. Some of the women were crying. I said, "Don't worry. It was just an earthquake."
"Just an earthquake?!" laughed one.
"Well, yes, " I said, "It could have been a plane."
One of the women continued to sob. "Don't worry," I said, "We're going to be OK."
This morning I realized that perhaps she was crying because she thought her job was in danger. The  glassy Aquarium looks like the world's most fragile building. For all she knew, the Aquarium might have to close for weeks or months.  Everyone was kept out of the building for 45 minutes while it was checked for structural damage.

The building appeared sound, so we were let back in. Some interior glass shattered in the "Australia" exhibit of the Glass Pavilion, so that exhibit was closed. Andrew pressed the staff person at the cordoned-off escalator about the safety of the fruit bats in the exhibit. The man assured Andrew that they were probably all right, but I could see that the question made him uncomfortable. He quickly changed the subject. "I was talking to the people down at the dolphin tank, and they told me that the sharks began swimming around like crazy just before the quake hit."
Posted by Cynthia at 9:25 AM 3 comments:

We were in the gift shop at the National Aquarium in Baltimore this afternoon when the glassware and jewelry suddenly began rattling as the building shook. We were all told to leave the building immediately. My grandson and I joined the crowds milling around the Inner Harbor. Cell phones were out. Everyone was talking about the earthquake.
After a quarter of an hour, the Aquarium was open again. Andrew and I wanted to see the jellyfish and the fruit bats. The fruit bats are housed in an area called "Australia." We got to see the jellyfish, but the escalator to the Glass Pavilion was cordoned off with yellow tape. "Sorry," said a staff person stationed at the escalator. Australia is closed. We've got shattered glass, and we're afraid more could break if there are aftershocks." We'll have to see the fruit bats another time.
Posted by Cynthia at 8:35 PM 2 comments:

The hummingbirds visit the feeders more often these days, getting ready for their autumn migration. They're so feisty. You'll see a tiny, green warrior perched on a branch, keeping an eye on "his" feeder,  ready to drive off any rival: mother, dad, brother, sister, cousin.  Funny how the first-cousin-once-removed keeps coming back for more.
Posted by Cynthia at 11:20 AM 2 comments:

I've already told you about how much I enjoy the horse ads in The Vendor, a biweekly publication for "plain people." Sometimes the ads mention a horse's pedigree. That means nothing to me, but it's fun to see some of the other details:


At the Amish vegetable stand, we asked Mr. Weaver about two descriptions we didn't understand. One was "up-headed." Every buggy horse we'd ever seen certainly looked "up-headed" to us.  Mr. Weaver replied that an "up-headed" horse has an especially proud  bearing.

"Oh," said Mr. Weaver, "you don't want a cribber. That's a horse with bad habits, almost like an addiction to cigarettes. A cribber is a horse that gnaws the wood in his stall."
Posted by Cynthia at 8:38 AM 1 comment:

"Temptation," "Bodacious," and "Incredible" are all varieties of corn.
The corn stood tall and glossy-green when we were in Ohio the weekend of July 23rd.  Our neighbor, David,  hoped for rain that weekend. When the corn is tasseled, it needs moisture to carry the pollen from the tassel to the strands of silk.  Each strand forms one kernal on an ear of corn.
There was more than enough rain that sultry weekend. We stopped at an Amish produce stand and bakery. We bought zucchini bars at the bakery and corn, tomatoes, and green beans at the produce stand. Mrs. Weaver told us that the two-color corn we bought that Saturday  was "Temptation," but that "Bodacious" would be available in a few days, and after that, "Incredible." When we went back on Monday (the stand is closed on Sunday),  her husband, Atlee, said that he picks the corn for the day's sales every morning. If any is left at the end of the day, he feeds it to the horses!
I almost howled in dismay, like that dog in "Ultimate Dog Tease" on YouTube.