And Still It Snows 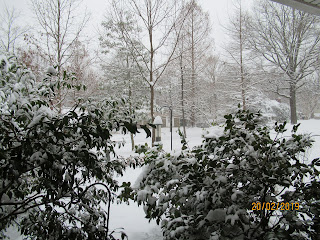 Enjoying a snow day in suburban Washington, DC.  The schools and county government offices are all closed.  No zumba class for me today. I think I'll make waffles for lunch.
Posted by Forsythia at 10:31 AM 13 comments: 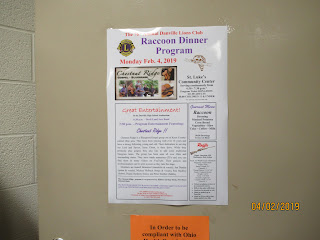 We try to attend this community fundraiser if we happen to be in Danville, OH on the first Monday in February. Bad weather usually keeps us home in Maryland. This year, heavy snow delayed our start by one day.  There was little chance of encountering more snow the day we traveled, but the temperature was bitterly cold. We arrived at our gate at 5 PM, only to find a frozen padlock.  We have several very nice neighbors and one of them stopped by on his way home from the auto shop where he works to help us out. Thank you, Mike!

Temperatures reached the mid-fifties by the day of the dinner, four days later. We went to the dinner with a former neighbor, who used to live in the farmhouse down the road, but has now moved to town. We walked with him through misty rain and darkened streets to the parish hall of St. Luke's Catholic Church, where the dinner is always held.   Thank you, David! 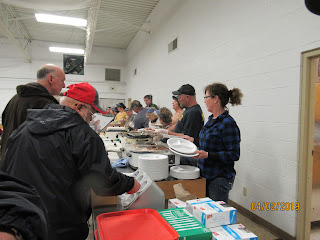 About 500 raccoons are trapped or shot beginning in the fall and frozen at a local meat locker.  The weekend before the dinner they are "dressed" and roasted by volunteers. The dinner is served cafeteria style.  Mashed potatoes, stuffing, corn bread and green beans are piled on each plate as it passes down the line. At the end of the line, you have a choice of either raccoon or ham, and you get to select your own piece of home-made cake.  Raccoon does not "taste like chicken," but it's not that bad, either. My sister-in-law likens it to pot roast. 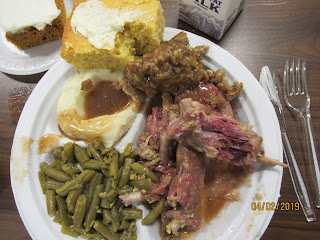 There were also three raffles (two fifty-fifties and one for a rifle).  We didn't win. We never do, it seems, but I have no idea what we would have done with the rifle if we had won it. 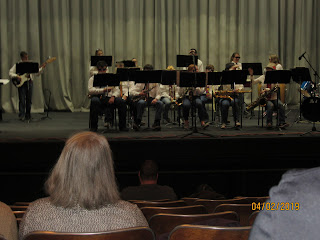 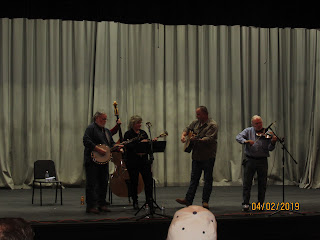 As we were leaving, I happened to notice this sign above the trophy case in the hall.  You wouldn't think such a sign would be needed in a close-knit community like Danville, OH, but there it is, a sobering sign of the times. 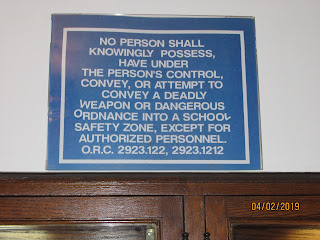