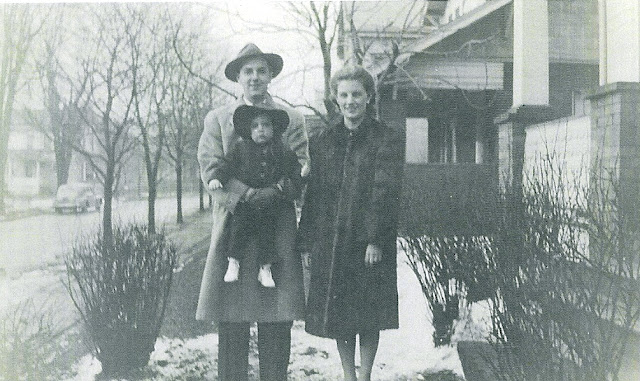 This is a photo of me with my mother and father. It was probably taken in the winter of 1941-42. I would have been between 15 and 18 months old.

My parents look happy. My dad was a young attorney in Meadville, the county seat of Crawford County in northwestern Pennsylvania.  He was ambitious. He'd just been elected District Attorney at the age of 29. Mom was probably at home with me. Their happiness, if that's what they had, did not last.

I'm told that they met at the Republican Picnic in the early 30's. Her parents had just bought acreage north of Meadville Her father was an attorney who'd recently retired because of chronic migraines. Her parents were remodeling the old farmhouse. The built-in bookcases, wainscoting and radiator covers were all of wormy chestnut. Grandmother said my dad probably thought they had money. They didn't.

Mother was two years younger than Dad. While he was in law school at Pitt, Mother began college in Kentucky, majoring in piano.  The college soon notified her parents that Mother was taking a bus to Pittsburgh every weekend. "Probably meeting a man," they said. She was. They were married in 1933.

In 1946, they divorced. They'd found out by then how incompatible they were.  He'd pictured a life without children and thought she'd be happy working as his secretary. in his law office. She pictured a house full of children. His idea of a good time was a night on the town. Hers was to cuddle up with a good book. Both sets of in-laws found fault with their children's mates. He ran around too much. She was a lousy housekeeper. She once scorched his shirt by trying to read a book while ironing.

After the divorce, she  moved to Florida, taking my four-year-old sister with her. I was supposed to join them when the school year ended. My dad, friends with the judge, ignored the agreement.  I lived with his parents, my Grammy and Grampy, until he remarried in 1949.  Mother immediately married a man she'd known in Meadville. A mason by trade, he'd already gone to Florida to find work during the post-war construction boom. They had three daughters.

Fifty-six years ago, on January 22nd, my father died in a plane crash. It was a small plane belonging to a small company owned by friends, for which he did some part-time legal work. He would have been 49 years old on January 26th. My stepmother later told me he hadn't wanted to fly to Buffalo that wintery weekend, but off he went. On the way back to Meadville, the plane iced up during a stopover in Erie and crashed upon takeoff.

Every January at this time I think back on those days. I will never forget the shock of the phone call from my stepmother. I took the call in the basement of my college dormitory. I remember dashing blindly up three flights of stairs to my room, where my two roommates and other close friends were waiting. They'd already been told what the phone call was about. Once home, I was surprised at how volatile everyone's emotions were. People would be laughing during an afternoon get-together at the house and then burst into tears that evening at the viewing.  Grampy wailed loudly at the funeral home, embarrassing my stepmother and aunts. He had unexpectedly lost his wife the previous May. This new loss was too much for him. In less than a year, the sad old man, suffering from cancer and the effects of a stroke, entered a nursing home. On March 2nd, 1964,  his younger son died unexpectedly.  Grampy died the next week.

My stepmother successfully sued the company. The damages were split three ways. When I heard the news, I am sorry to say I smiled and hugged myself. I wasn't rich, but I knew I would always be comfortable. Yet I feel sad about this unearned comfort and probably give away a little too much. For her part, my sister used some of her share to pay the college tuition for our three half sisters.  My stepmother lived the next 30 years in the house she loved, adopting stray cats and volunteering at a local nursing home.

Still, January will always be the cruelest month.
Posted by Cynthia at 6:13 PM 7 comments: