Our daughter and I always go on at least one shopping expedition when the family is down at the beach. We leave the men at home.

Our daughter knows where she wants to go and what she wants to get. "We'll stop at the seashell place first. Most of their stuff is really tacky, but they have great shells and I want to get one to replace the one that Mabel chewed up." (Mabel is their big lovable runaway mutt.)

The seashell place was pretty tacky.  Plaques, glassware, seashell jewelry, knick-knacks galore, ribald seashore humor on some of the stuff. The odor of scented candles was well nigh overwhelming.  I was happy to leave. A row of resigned-looking men occupied the benches on the porch, waiting, waiting.

"So now I guess we're going to 'Christmas Tree Hell'?" I asked.

Christmas Tree Hill was a bit more upscale. The humor was subtler. The merchandise pricier. The candles emitted the quiet holiday scents of bayberry and cinnamon. I bought a "Lang 2016 American Cat Calendar" and two dishtowels embroidered with pinecones for a December silent auction that I know is coming up.
Posted by Forsythia at 8:41 AM 1 comment:

Hope: A Memoir of Survival in Cleveland

Hope: A Memoir of Survival in Cleveland by Amanda Berry
My rating: 4 of 5 stars

I read this book because my husband got it for his birthday and also because he's from Cleveland, the location of the house of horrors, where three young women--Amanda, Gina and Michelle-- were held captive for a decade. The book is based largely on Amanda's diaries and Gina's recollections. The young women tell how their jailer, Ariel Castro, tried to control every aspect of their lives, They paint his portrait in true and unflattering colors.

Amanda and Gina emerged unbroken from the house on Seymour Avenue. Their love of life and their senses of humor were intact. They were ready to move on. Their captor, on the other hand, killed himself after a  few months in custody, unable to endure the thought of spending the rest of his life in prison. Ariel comes off as a narcissistic control freak who saw himself as a victim.  Yes, he beat his common-law wife nearly to death, but it was her fault for always complaining about nothing. Yes, he robbed the girls of their youth and freedom, but it was their fault for trusting him enough to get into his car. Yes, ten years was a long time to spend under lock and key, but it was the fault of the police and the FBI for being too stupid to find them sooner. Yes, he had sex with them repeatedly whenever he wished, but it was not rape. It was “consensual.” He saw himself as “normal, but sick.” He described himself as “coldhearted,” admitting that he lacked empathy and compassion. He clearly enjoyed tormenting the girls by arbitrarily revoking the few pathetic privileges he granted them. Yet this sociopath adored Jocelyn, the baby girl he fathered. Even Amanda, the baby’s mother, had to admit that he treated his little girl well. As Jocelyn reached school age, however, she began asking embarrassing questions that her father couldn't answer. Amanda finally realized that Ariel would never let them go, despite vague promises. She once lost an almost perfect chance to escape and deeply regretted it. The next time an opportunity arose, she choked back her fear and seized it.  Best wishes to her, Jocelyn, Gina and Michelle for many wonderful years to come.

Posted by Forsythia at 12:23 PM No comments:

Far from the Madding Crowd

Far from the Madding Crowd by Thomas Hardy
My rating: 3 of 5 stars

I can't wait for the movie. There was much to enjoy in this book, yet I don't think I want to read any other Hardy novels. His style is preachy, teachy and tiresome. In creative writing classes, would-be authors are advised to "show, not tell." Well, Hardy tells. And tells. And tells. So I learned a few fun facts about shepherding and farming in 19th century England, was forced to look up the meanings Greek and Latin words and phrases, and had to guess in what way "Greenhill was the Nijni Novgorod of South Wessex." Underneath all the verbiage and filler, he had a pretty good love-triangle storyline simmering away. That's why I can't wait for the movie.

Posted by Forsythia at 10:27 AM No comments: 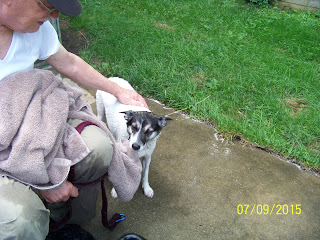 We had to call this a "beauty intervention" because the word "bath" would have set off the alarm.  As it was, Dilly acted as if we were trying to drown her. We invited her into a tub of warm water. The water was no higher than her ankles, but she thrashed and jumped and fled for refuge under the Joe Pye weed. What an ordeal for man and beast.

Why must dogs roll in unspeakable, smelly muck?  We went to the cabin this past weekend. On two successive days,  Dilly came back from a romp in the woods smelling just awful. Spot-cleaning didn't do the trick. When we got back to Laurel, she was still redolent of something horrid. So she had to have an "intervention."
Posted by Forsythia at 8:39 AM 1 comment: