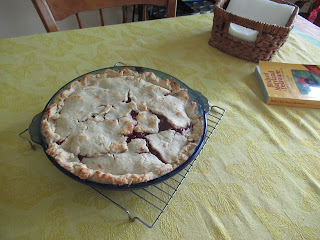 Once I decided to go back to making pie crusts from scratch instead of buying a ready-made crust, I opened the door to madness. I followed the instructions for a double-crust 9-inch pie to the letter, but the crust always came up short. Now, shortness is a good thing in pie crusts when you're talking about flakiness, but not when you're referring to coverage.

As a last resort, I measured the pie plates. Both are 10-inch plates.  I'd had them for decades, and just assumed they were standard 9-inch plates. Turns out the flakey one was me. Next time I will use the recipe for a double-crust 10-inch pie.

I Finished a 1500-Piece Puzzle 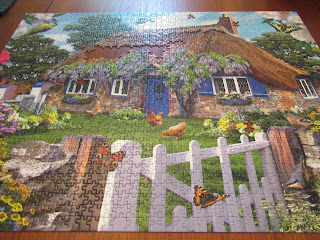 I started this puzzle at the end of July.  Our daughter didn't want to tackle so large a puzzle, so she passed it on to me. I'd already given up on another 1500-piece puzzle several years ago. It had a ship passing through a fjord lined with thousands of identical gray rocks. Before long, fearing for my sanity,  I boxed it up and gave it away. Looking at the wisteria blossoms and thatched roof of this one, I anticipated similar trouble, estimating that I'd finish by Halloween if I stuck with it.

The blossoms and roof came together faster than expected. To my surprise, I finished the puzzle four days ago. Maybe I'm getting better at this. However,  I think a 1500-piece puzzle is just too large for me. I really prefer the 500-piece Ravensburger puzzles with large pieces. They're challenging enough!

Dilly Goes to the Vet 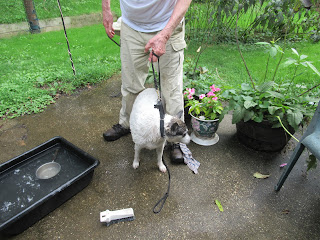 Dilly had a vet appointment this past Thursday for a check-up and to get all her shots. We wanted her to smell nice for the visit and also to wash off the bits of food stuck to her head because of P's penchant for letting her lick bowls, plates and empty yogurt cartons. Bath Day was Wednesday. She wasn't pleased. She bolted from the tub and splashed water all over her parents.

Our daughter is very protective of us. Because of our advancing ages and the prevalence of new cases or coronavirus in our area, she forbad us to take Dilly to the vet. Dilly's crazy about her and trustingly jumped into the car. Off they went with a list of typed questions and a stool sample in a plastic margarine container. P thought it was really funny later that day to open the refrigerator and say, "Oops, sent the wrong container!"  In many ways, that man is still in eighth grade.

An hour later, Dilly was home.  The vet was pleased that she'd lost a pound this past year and pronounced her a "delightful dog."  Here she is on the way home, smiling  because she can now cross the vet visit off her "to-do"list. 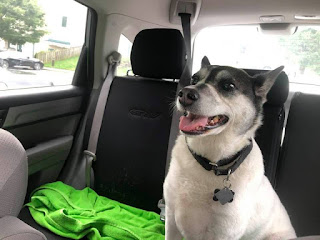