Late yesterday afternoon our younger daughter stopped by for a short visit (with social distancing and masks.) She brought sandwiches for our dinner. As usual, we talked about the grand children. The older one, a boy who will turn 13 the day after tomorrow, has had a year of distance learning and doesn't much like it. He's noticed that the teacher takes on a sugary persona when the session is being recorded, but reverts to normal off camera. When the recording stops temporarily,  she'll bark at the students. "You need to sit up straight! You need to pay attention. All eyes should be on me!"  When recording resumes, she's all sweetness again.

Tomorrow both children (his sister is six) will return to the classroom two days a week. Our daughter is a little apprehensive about this. She's over fifty, but has not been vaccinated. She doesn't know how many, if any, teachers have been vaccinated. Her husband, who's in the US Army band, has been vaccinated.

Neatness is important to me. After a year of Covid living in a menage a trois (two people and a dog), clutter abounds. It's driving me crazy. My spouse doesn't seem to mind it as much as me. When one pile of stuff threatens to topple over, he just starts a new one.

We had two vacuums that were beasts. Now that I have less stamina, I no longer want to wrestle with them. Although my husband is more energetic than I, he was becoming less inclined to drag them out. On the suggestion of a fellow blogger, "High Riser," we bought a powerful, lightweight stick vacuum and are very pleased with it. I've already given one of the beasts away. The other will soon follow.

The new cordless Dyson needs to be recharged.  Our temporary "solution" was to just lay it on the floor and plug it into the nearest outlet, but after a couple of months of tripping over it, we knew we had to find it a permanent home. Our tiny laundry room was the obvious choice, but the builder of our 50-year-old house provided only one outlet, which was already being used by the washer.

On to "the addition", which we built twenty-five years ago before Mom moved in with us. First, we assumed we'd just screw the docking station directly into the wall, but the "easy" You Tube instructions involved first installing a 4-foot long wooden plank and then mounting the docking station on that. To make things easier for ourselves and also to avoid damaging the wall, we opted to buy a portable stand.

Nothing is ever easy nowadays. There was still a bit of a hassle in the form of "some assembly required". The stand arrived with a large sheet of small-print instructions involving numerous miniscule screws. Oh, the patience of that man! He persevered and soon we had a handy little "tree" that holds not only the vacuum but the attachments as well. 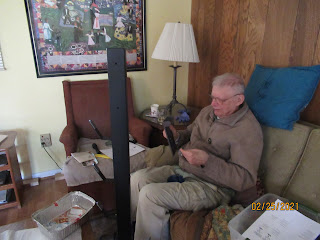 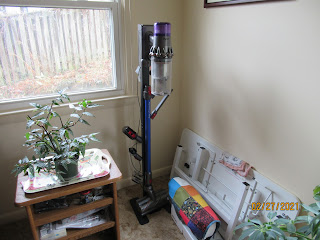 See what I mean about the clutter? Would anyone like a never-used sewing machine with its own little table?
Posted by Cynthia at 4:36 PM 10 comments: