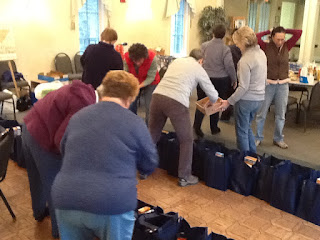 In our Baptismal Covenant, we promise to "seek and serve Christ in all persons." On the Saturday morning before Christmas, parishioners filled grocery bags for 41 families. These were mainly the families of children who attend nearby Laurel Elementary School and depend on meals served at school. The bags of groceries included not only a turkey and all the trimmings, but also enough food to help feed the family during the winter break.

St. Philiip's also adopted five families through Laurel Advocacy and Referral Services (LARS) and provided them with clothes, toys, and food for Christmas. In addition, parishioners gave gifts to children whose parents are temporarily living at Reality House, an inpatient addiction treatment center just down the street from our church.

On Sunday morning, December 23, we had just one service at 9 AM: Advent Lessons and Carols.  Then the choir had a special two-hour practice while others "greened the church." They made garlands of fresh pine and laurel, which were draped over the old, dark wooden beams high in the nave.

Christmas Eve services began at 4 PM with the Children's Christmas Play. We had two Festive Eucharists, with incense, bell choir, choir anthems, carols, and even a marimba. The first service was at 8 PM; the second, at 11 PM. "Midnight Mass" is an Episcopalian tradition, but I wonder how long our sleep-deprived generation can keep it going.

Tonight we welcome 34 homeless men and 4 homeless women for a week's stay with us. They'll have a warm place to sleep and they'll have a hot, home-cooked dinner every night. After breakfast, everyone will leave for the day, taking a bag lunch. Many of our guests have jobs. Those who are unemployed might head for the public library or the "day center" on Route One. Next Sunday morning, our guests will move to another congregation. The Winter Shelter began the first week in December and will continue until mid-March. Over 15 congregations, including the synagogue, will each host the guests for one week.
Posted by Cynthia at 12:35 PM 1 comment: 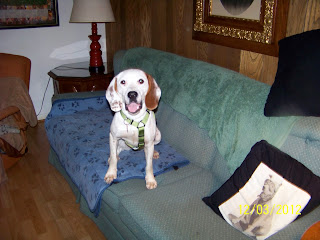 We have a new grand dog. Her name is  Mabel. Our daughter's family found her at Tara's House, a shelter in Frederick, MD.  She's part pointer, about a year old, housebroken, spayed and mischievous.


She's been spending weekdays at our house. We'd been keeping her elderly and rather incontinent predecessor, Violet, confined to the kitchen and family room by blocking the kitchen door with a rail from an old baby crib. This worked for Violet and Ramsey. It seemed like a sensible arrangement for Mabel, but she would have none of it. She sailed over the fence with ease, like a horse at the Olympics steeplechase. 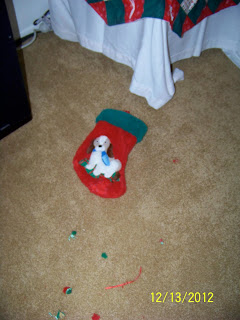 Although she arrived at our house with her own bag of toys, she soon found others around here that she liked better. She pulled down and ripped up Ramsey's stocking. Perhaps it was still redolent of treats from Christmas Past.  She also made a chew toy out of our TV remote, seen below in the photo of the Beautiful Dreamers,  just prior to its ruination, 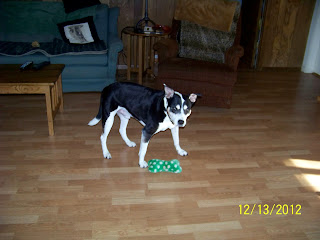 At 13, Ramsey is totally bored by squeaky toys. This polka-dotted plush bone temporarily revived his interest, but only because it belongs to Mabel. By making it his, he hoped to show her who was boss. 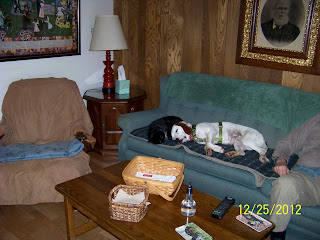 We don't know much about Mabel, except that she was found on a country road in West Virginia. We think she must have grown up around cats, because she gets along fine with Georgie.

Email ThisBlogThis!Share to TwitterShare to FacebookShare to Pinterest
Labels: Pets

A New Dog, An Old Story

A silly new dog has joined the pack. I planned to write about her today, but after the tragic killings yesterday of the young children and their teachers in Connecticut, it didn't seem right.  Maybe I'll tell you about Mabel when things get back to normal. If they ever do.
Posted by Cynthia at 9:32 AM 2 comments: