At the Library at Monticello 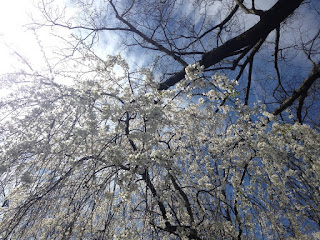 During 8-year-old grandson's Spring Break, daughter and family went to Thomas Jefferson's home, Monticello. The weather was dreary the first two days of the trip. The 2-year-old was cranky from teething, so our daughter, Becky, didn't get to finish the tour of the mansion. Just Tom and Nate joined the group in the library. The guide said that Jefferson owned editions of 19 percent of all the books published in his day. He had the largest private collection in America.

Yesterday his Grandpa asked Nate about the title of the forthcoming book.

The shower curtain liner has gotten grimier and grimier over the years. Still serviceable, but oh, so ugly, with rust stains and splotches of mildew. I pictured myself on the driveway this summer, dealing with the mess. I'd put on my grungies, spread the white plastic liner on the driveway and spray it with a chlorine-based cleaner. I'd ignore the stares of the neighbors.

Mind you, I don't like using chlorine. It's bad for the environment, or so I'm told, but it's also something I know I should never ever fool around with. No matter how careful I am with the stuff, I inevitably end up destroying a favorite piece of clothing when I use it. Don't know why. Don't know how. White spots just happen.

That's why I am so happy with a recent discovery. After a shower, I sprayed the liner with that daily shower cleaner I use when I think of it. I rubbed a notebook-sized area lightly and the grime just disappeared.

So I don't have to take it down.

I don't have to spread it out on the driveway and clean off the leaves and grass adhering to the backside afterwards.

I don't have to mess around with dangerous substances.

I don't have to mutter and swear when I'm rehanging the liner and miss one of the shower hooks. (They're the devil to open and close.)

I'll just clean a little patch of the liner every time I take a shower from now on. Kind of like painting the San Francisco Bay Bridge. It's a job that never ends. I am so happy.
Posted by Forsythia at 11:50 AM No comments: 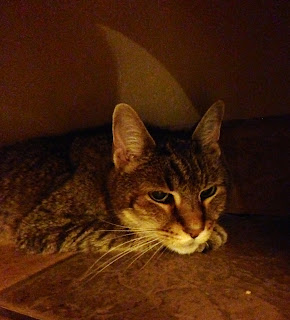 His name was Clarence and he came with a sibling called Conan. Their names did not match their personalities. Conan was timid. Clarence--who soon came to be known as "Clance"--was the bold swashbuckler. Our daughter adopted the pair when she was living in a rowhouse on Baltimore's Federal Hill. One day the intrepid Clarence ran away. He swaggered back a few days later with an oil spot on his head and an attitude: "Don't even bother to ask where I've been and what I've been doing."


The cats and the pit bull moved to a crackerbox of a house when our daughter got married. A large sheepherder-type dog belonging to our son-in-law was already in residence. In due time, a baby boy arrived. When the baby was a few weeks old,  Conan suddenly had to be put to sleep. A stray cat turned up the next day, as if an invisible "Vacancy" sign had been hanging in the window. Our daughter was so sad about Conan that our son-in-law briefly considered letting it into the house. Talking it over, we quietly agreed that two big dogs, a cat and a baby were probably enough, so he didn't encourage the stray to hang around. Clance thus became King Cat.

A few years passed. The family moved to a spacious 4-bedroom house.  The two big dogs died. A beagle joined the family and was made to understand that Clance was In Charge. Clance aged well. He was wiry and energetic.  He had the run of the house until they found out that our grandson was allergic to cats. So Clance was confined to the large Master Bedroom, where he spent much of the day under the quilt, impersonating a loaf of bread. Our daughter even had a screen door installed so that the bedroom door could stay open all day. She didn't want him to feel lonely. He was still very much a part of the family.

A few more years passed. Clance, now in his late teens, seemed likely to live into his twenties. Alas, he was getting forgetful. "What's this box for?" he asked one day. He used the air duct instead, creating a yellow spot on the living-room ceiling that also showed up on a long list of "Things to Fix Before We Sell the House." The year before, our daughter and husband decided their the house was too big and too far away from the husband's workplace. By this time last year, they were planning to put the house on the market in June.

A realtor came by. She wrinkled her nose at the Master Bedroom. "You've got to do something about that cat," she said.  It didn't look like the Feline Grim Reaper was going to visit anytime soon. Anyway, despite his growing forgetfulness, he was still beloved. Reluctantly, our daughter moved him to the basement bathroom. She felt awful about it.  She gave him a comfy upholstered chair and turned on the electric heater to ward off the chill.

The family went away for a week. When they got back, our other son-in-law called me. "Do you know when they're going to pick up their aquarium?"

I asked my husband, "Why would they get an aquarium when they're getting ready to move?"

"Oh, it's really just a fishbowl," he said. "It's supposed to give Clarence something to look at."

About a month later, Clarence were berserk. He smashed his water bowl and feeding dish. Our daughter was in the basement at two in the morning sweeping up shards of glass. The cat was no longer himself. Heartbroken, our daughter took him to the vet. The diagnosis was kidney failure.

The day after he was put down, a Professional Organizer (PO) was at the house, helping our daughter get a handle on the monumental job of downsizing and moving. I was there, too, helping to take care of their newly-adopted baby girl. The PO was working in the garage and the rest of us were in the kitchen. Suddenly, we heard the insistent meowing of a cat. Daughter and I looked at each other in disbelief. Was there another invisible "Vacancy" sign in the window? The meowing continued. Where was that cat?  Then the PO appeared and pulled her cellphone out of her purse. "Sorry," she said, "That's my ringtone."
Posted by Forsythia at 5:29 PM 1 comment:

I stopped in at the Post Office about noon on Sunday to mail three Netflix CDs. Seeing the self-service kiosk, I decided to buy stamps. The first thing I noticed was that "This machine accepts only debit or credit cards." OK then. I inserted my debit card and ordered 4 sheets of stamps, ten stamps to a sheet.  My card was debited $9.60. The screen advised patience, as about a minute was needed to print the stamps. Soon some stamps appeared. But only one sheet.


Well, this was no good. I ripped a piece of paper from my pocket calendar and wrote a curt note to Uncle Sam. I told him what had happened and that I would be coming in on Monday for the remaining three sheets. I happened to glance at the machine again. Lo and behold, another sheet had appeared in the meantime, but only one. So I stood there in the deserted post office for about 5 minutes, staring hopefully at the machine, waiting for two more sheets to print.

Fortunately, another customer arrived just as I was about to give up. When I told him what happened, he replied, "Oh, sometimes they get stuck." Twisting his hand up behind the plastic shield, he reached the stamp-dispensing slot, but no sheets were there. "Let's see what happens when I buy my stamps," he said. He inserted his card and ordered two sheets. Four sheets promptly appeared. He handed me my two sheets and was on his way.

Next time I'm buying my stamps from a person.
Posted by Forsythia at 3:14 PM 1 comment: