Our daughter takes her dry-cleaning to a shop run by two very friendly Korean ladies in their sixties. They get right to the point, asking such questions as, “How come you not have two baby?”

They asked this question about three years ago, before Becky and her husband adopted a baby girl.  Their son, who would have been about four at the time, might have come in with her that day. Becky said, “I’m 47. I’m not going to have another baby.”

“You think you too old? You not too old. She (pointing to her co-worker) have baby when she 47, so still you can do.”

The next time she went in, the lady said, “Her baby here today. You can see. She fine.”
She called the “baby”, who was in a back room of the shop, to come out. A pretty young woman of about 20 appeared.  She smiled, said hello and returned to the back room.

The lady said, “So now maybe you have baby.” Then she turned to her friend. “She not American,” she remarked.

Hearing this, Becky objected, “But I am American. What else could I be?”

“Yes, not look American,” agreed the other.

The two considered her for a moment. “Polski,” said one. The other nodded in agreement. 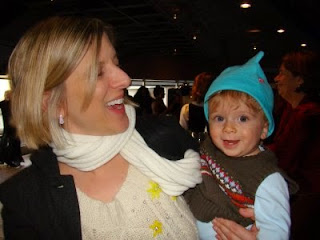 Posted by Cynthia at 6:49 PM No comments: 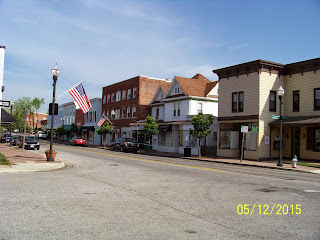 Laurel has held its Main Street Festival on the second Saturday of May for more than 30 years. At 7 AM, the street is closed to traffic. Vendors start setting up their booths.  At 9 AM, the parade starts. 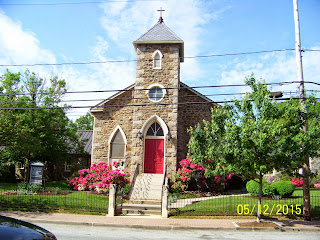 Our church is at Sixth and Main Street. Every year we have games for kids, a crafts booth and a book sale. This year I worked at the book sale.

Our younger daughter is going through stuff at their house, getting ready to move. She found a letter I wrote to her 21 years ago while she was living in Colorado. In the letter, I mentioned the Main Street Festival:


"Phil and Margaret and Margaret's friend, G., showed up at about 2, when Margaret was supposed to work (running one of the kids' games). They all wore "Stop the Stadium" buttons. They brought one for me. I said I was no longer opposed to the stadium. I had had a change of heart. When I arrived at the festival early in the morning, I'd caught the end of the parade. They had saved the best for last: the Redskinettes!  How brave they were to come out on such a cold and rainy day in those skimpy costumes, which were now plastered to their shapely little bodies. The Redskins band was there too. When they struck up "Hail to the Redskins," my heart and my resistance melted. The stadium might not be so bad. In fact, it would be wonderful. I wondered how long it would take me to learn to play the clarinet."

I wasn't really in favor of the stadium. Our streets were congested enough as it was.  The Laurel Clergy Association opposed the stadium because people going home after church would get caught up in heavy stadium traffic. The owners of the Redskins endeared themselves to no one when they said, "Well, just change the time you have church." Eventually, the Redskins built a stadium in Landover, slowing traffic on I-495 ("the Beltway")  to a crawl on game days.

How times have changed. Although the question about where to build the stadium was settled long ago, a new controversy has arisen over changing the team's name. I'm also somewhat amused by my reference to the "shapely little bodies." What was I really saying about the Redskinettes, I ask myself. I think I was putting them down. Back then, I saw them as airheaded bimbos. After watching a TV series recently on tryouts for the Dallas Cowboys cheerleaders, I changed my mind. I now see these women as real athletes who take their dancing seriously. Sure, the cheerleaders are mostly about NFL big business--the costumes, the big hair, the loss of a place on the squad because your short legs don't look right in the tall boots--but the tears of the losers are real, and, for the record, some of the winners are rather plain when you see them up close.

The Festival has also changed. The food, for instance. Now you can get Pad Thai and falafel, which  few of us had ever tasted in 1994. The merchandise in the craft booths has also changed over time. Beany Babies are out; knock-off apparel for pricey American Girl dolls is in. This year, for the first time, a group of Amish rented a booth and were selling handcrafted wooden items. Several women, wearing long, black aprons and little white caps,  came in to use our restroom and stayed for awhile to browse the books.
Posted by Cynthia at 8:10 PM No comments:

Our little cat died at the end of April. Her designated birthday was January 1, 2004, so she enjoyed just 6 of her allotted 9 lives. 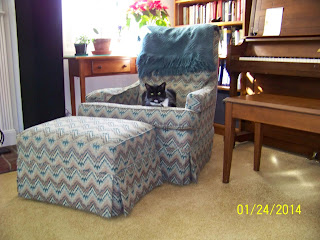 Enjoy them she did. We got her in 2007 after Mom's ancient cat, "Sadie the Lady," died. At first,  Mom insisted, "I don't want another cat." A few months later, she said,"I think I want another cat." So we began looking at second-hand cats. We visited a cat sanctuary, where the home owner sheltered at least 20 homeless cats. "How many do you have?" I asked. "I have no idea" was the reply. None of the candidates passed muster. Wrong color. Wrong fur. Wrong face. Too big. Too active. Too old. Too young. She fell in love with a tiny tuxedo kitten, but decided that he was "too wild."

"I'm not putting Arlo through that, " she said. Arlo was our aging beagle.

Mom eventually settled on an older tuxedo. A cat-rescue person brought Samantha and Georgie to our house. Although Samantha was too timid to come out of  her carrier, Georgie ventured right out, boldly exploring every corner of Mom's "apartment" as if to say, "Yes, this will do just fine."

She was a lovely, affectionate cat. Every afternoon she and Mom took a nap. When Mom sat in her chair at other times, Georgie often curled up on her lap. She was such a sweet cat that the teen-aged cat-sitter who fed her when we were away spent nearly an hour a few hours before she died, just sitting with her and tenderly stroking her soft fur.

Mom always said, "No one loves animals like me. Phil and Cynthia like animals, but they do not love them and they don't know how to take care of them."

What do you do when you're 99 and afraid of dying and leaving your orphaned baby to inadequate foster parents? Mom's initial idea was to meet up with Georgie outside the Pearly Gates. "When I die, I want you to have Georgie put to sleep," Mom told our daughter, Margaret. "Cynthia will just shut her up in my apartment and I can't stand the thought of it."

After Margaret declined to send Georgie across the Rainbow Bridge, Mom turned to Pat. Pat was a friendly woman who loved animals and old people. She often visited Mom just to chat. Mom painted such a grim picture of Georgie's future that Pat readily agreed to take her after Mom died. I didn't know about these arrangements until Mom's memorial gathering at our house, when Pat asked, "When do you want me to pick up Georgie?"

Mom died in December, 2008. Despite her misgivings, Georgie had a pretty tolerable life with Phil and me. She enjoyed the run of the house, where she discovered and claimed several prime bird-watching windows. She batted toy mice around the family room.  She joined us on the couch for Netflix movies. She dined on all varieties of Fancy Feast. Her fake leopard-skin bed was warmed by a heat duct. Her shots were up to date and she had regular dental visits. 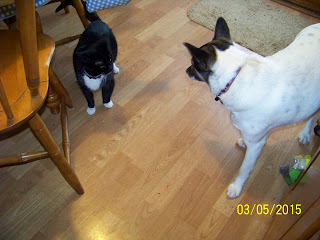 When our new puppy, Dilly, arrived last September, Georgie welcomed her with a swat on the rump. After that, it was hiss and make-up. There were daily sparring matches, which usually ended with Georgie dashing out of the room. She never stayed away for long. They might resume their quarrel when she returned or they just might cuddle up together on the couch. 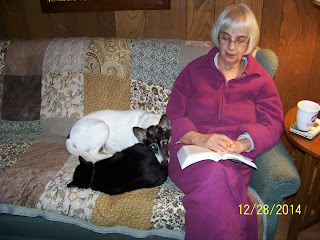 Georgie was diagnosed with an aggressive form of cancer in January, 2014. Surgery bought her 15 good months and Dilly filled those months with fun.