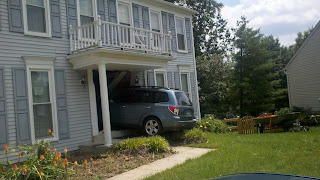 After my accident, I  said to myself, "I am not mad at you, but I am disappointed in you." I felt scared, sad and ashamed. I don't even like to think about it, much less talk about it, but I want to tell my story if it will keep even one person from making the same stupid mistake.


I wasn't really driving. I was parking our 2010 Subaru Forester outside my grandson's house. I should have put the car in "Park" and had the key in hand before I reached for a book on the floor of the passenger side.

Then I noticed that the car was still inching forward. When I saw that the curbside mailbox was about to shear off the side mirror, I stepped on the brake. Only it wasn't the brake. The car shot forward, demolishing the mailbox, crashing through a 5-foot-tall magnolia, climbing the front steps of the house next door and coming to rest in the foyer.

The house has been vacant over a year. If there was ever a silver lining in the cloud of foreclosure, this has to be it.  The former owner used to run a daycare center in this house. 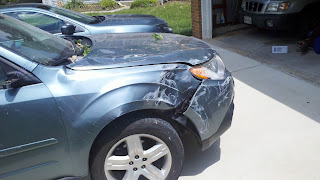 The accident happened on June 17th. The front axle is broken.  The hood and front doors got scratched and dented, and I got a scratch on my wrist. The body shop said 20 days, but I don't know if that's calendar days or business days.

Email ThisBlogThis!Share to TwitterShare to FacebookShare to Pinterest
Labels: Klutziness 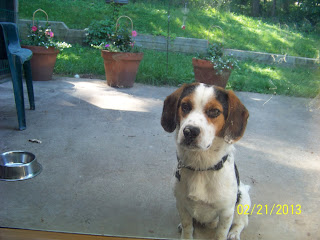 This is Roscoe, our younger daughter's new dog. He's spending the night with us while his family is away.


Our extended family lost three dogs over the past ten months. The first was Sophie, who belonged to our younger daughter Becky, her husband, Tom and their son, Nate.  Sophie died unexpectedly in October. The second was Violet, who belonged to our older daughter Margaret, her husband, Michael and their son, Andrew. She died in November at age 15.  Last to go was Ramsey, who died in May. He also belonged to Becky, but lived with us, as I explained in an earlier post.

All this dying raised questions for five-year-old Nate. He's been asking his parents if people die too. His mother and father have been trying to explain.

Since Nate was just a baby when she died, he must have picked up the idea of "too old" from listening to what we adults have been saying whenever we talk about Grandma Dott's last few years.

Recently, Nate listened as his mother read a book to him in which objects fall overboard and sink. He asked, "Do people sink when they fall overboard?"

"You made a mistake," he said sternly.  This wasn't the first time he'd told her that she'd made a mistake by taking him into the ocean that day.

She laughed. This is something she and Tom would never say to him, so it's an expression he's picked it up somewhere else. Sounds like early 21st-century ParentSpeak to me.
Posted by Cynthia at 1:26 PM 3 comments: