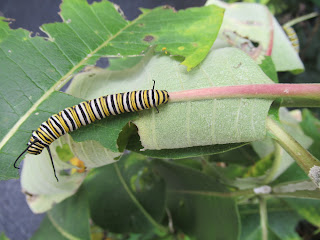 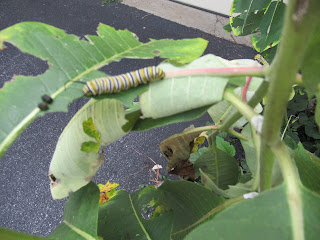 This story is from an e-mail my husband sent to his friend:


Cynthia and I are anxious every day about our many monarch caterpillars, chrysalises, and adults.   They are in all sorts of states.  But this is pretty much the end of the nursery.  There are barely any uneaten milkweed leaves left.  Today I stepped on, or rode my bike over, a mature caterpillar on our driveway. Broke my heart. When they stop feeding they begin a long journey away from their feeding area to a high place—such as the ceiling of a porch-- to form their chrysalises . We have a high stool under our porch mailbox that they really like.  It has about 10 chrysalises hanging from under the seat right now.  When a mature caterpillar finds a place to its liking, it fastens one end of itself to this spot, releases its hold at the other end and hangs for a day or so.  While hanging, it forms a “J” shape.  When it's ready, it forms its pale green chrysalis seemingly instantly.  I've never seen it happen.  I look, and it's a hanging J, and 10 minutes later I look again, and it's a fully formed chrysalis.  After about ten days the chrysalis turns black and in another half day or so the adult butterfly emerges.  It stays put for some hours, drying and flexing its wings.  And then it's gone. Off to Mexico. 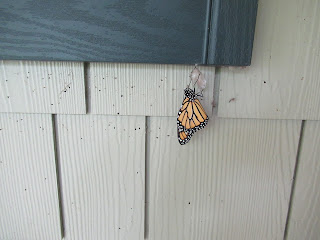 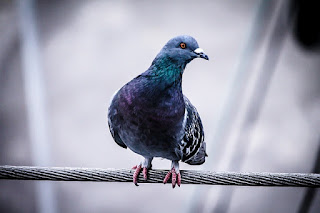 I did not take this picture of our guest, and he wasn't this pretty.  He was just an ordinary-looking big-city pigeon, who showed up on our porch one Saturday three weeks ago.  Why he picked our porch we didn't know.  What if his friends and relatives were to follow him here?  What would the neighbors say then?

My husband spotted a band on his leg.  Maybe he was someone's pet.  He was wary of our approaches.  You couldn't get close enough to catch him, but even if you could, the print on that band would probably be too small for old folks to read, even with their glasses.

We e-mailed the 700 families that live in our neighborhood: "Has anyone lost a pigeon?"

No one had lost a pigeon.

I tried chasing him. He would just waddle away from me as fast as he could and then fly up on the roof.  That answered another question.  It wasn't an injury that brought him to our door.

We went to a movie.  When we came home, he was gone.  We were delighted.

The next morning he was back. He'd apparently roosted overnight in a nearby tree. He began strutting around as if he were thinking of moving in for good. He hopped up on the porch furniture, appraising his new hang-out with beady red eyes. He dropped a calling card on the plastic upholstery. He reminded us of the wicked penguin in the Wallace and Gromit cartoon.

"Well, maybe he's ours," we said, after four days.  We set out a dish of water and scattered some seeds on the ground.  We got almost teary-eyed watching the cute little guy drink.

Then, a day or two later, he was gone.  He never came back.  Maybe the seeds and water gave him the energy to go home.  I gotta say we kind of miss him.