I'm still recycling poems from Free Verse and Worse, one of the blogs I'm closing down.

This poem is about 15 years old. It's a composite of stories I heard from a couple of homeless men who were guests at our church during "WinterHaven."

WinterHaven is a cold-weather shelter operated by 20 congregations in and around Laurel, Maryland.  For nearly twenty years, these congregations have taken turns keeping homeless men and women from freezing to death during the winter. The guests stay with each congregation for one week.  They receive a warm bed, dinner, breakfast, and a bag lunch. Sometimes during his or her time in the shelter, a homeless person will decide to give up life on the street. He or she embarks on a difficult journey that may eventually lead to sobriety, sanity, and a permanent place to stay. An impossible dream for too many.
This poem reflects the kind of guest we usually saw in the early 1990's:  male, middle-aged or older, alcoholic. Since then, the typical male guest has gotten younger and is often addicted to drugs as well as alcohol. Some are veterans. Ten years ago, Winterhaven began welcoming homeless women. While the number of male guests ranges from 20 to 35 per night, we usually see no more than a half-dozen women all season. Typically they suffer from severe mental illness.
"WinterHaven"

The judge asked me,
"Why did you go there
When you knew..."
And I said,
"But Judge, she's my mother."
That other woman there,
she turned my ma against me.

I was born on Christmas Day,
had just two Christmas trees
my whole life.
Called my ma and told her,
"Ma, its gettin' cold
and I need my sleepin' blanket."
She said she'd leave it on the porch,
but that other woman there,
she turned my ma against me.

That other woman,
she wants to get my house.
I said, "Ma, you didn't sign no
paper giving her my house, did you?"
and she says, "No, Son, I didn't,"
but that other woman there, she
turned my ma against me.

Another woman, friend of mine, said,
"Don't go over to see your ma no more,
because that woman will kill you."

No one likes that woman.
Her old man, he don't like her.
Her kids, they don't like her either.
That other woman there, she
turned my ma against me.
Posted by Cynthia at 7:56 PM 2 comments:

Email ThisBlogThis!Share to TwitterShare to FacebookShare to Pinterest
Labels: Poem 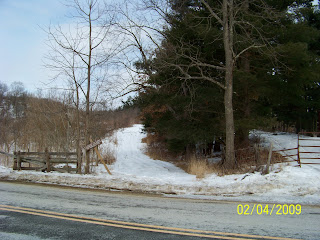 We may buy us an A-frame
on Jericho Road,
where few that pass by are strangers,
near that little clutch of houses
called Greer, for those who farmed
the land 200 years.
In the bottomland by the Mohican,
the corn shocks stand dry and mute.
They used to hunt here, but they are gone.
We now and then kick up an A-shaped flint.
Sometimes at dusk
it is easy to think
that the shocks are silent,
ancient watchers,
but they are gone now
who once walked this land
and took the deer
with bow and arrow.
There once was a man
who hunted on our posted lands,
and when another came,
his license on his back,
this man complained.
"He seems to think,"
laughed Alice Greer,
"that in Knox County
all the deer are his."
Posted by Cynthia at 6:20 AM 2 comments:

Robert Schumann wrote a song called "Samurai." I heard it on the radio yesterday for the first time. It sounded quite a bit like another song he wrote called "Traumerei."
Posted by Cynthia at 8:50 AM 1 comment:

In the cold spring rain
The woodpecker never stops
Rapping about love.
Joe-Pye weed in bloom
Monarchs light on purple clouds
Floating on the breeze.