Yesterday, while folding laundry in front of the TV, I chanced upon The 700 Club.  The host,  Pat Robertson, was whining that the new Hate Crimes Bill was just another example of the "persecution" of "believing Christians." Why? Because he's afraid that pastors whose sermons condemn what he calls the "lifestyles" of gays and transgendered folks could go to jail. Oh, get real, Pat! Believe me, you and your  "believing Christians" are not the victims here.  Do you want to know what a real victim looks like? A real victim gets tied  to a fence and beaten to death because someone can't tolerate his "lifestyle."

Email ThisBlogThis!Share to TwitterShare to FacebookShare to Pinterest
Labels: IMHO

Death of a Tenant

We received "Norma's" obituary last month from our neighbor in Ohio. "Norma" was never actually our tenant. Our niece inherited the part of the farm where the old house stood.  Then again, maybe "Norma" wasn't really a tenant at all. Don't tenants usually pay rent?  "Norma" and "Ralph" were living in a decrepit old house down the road when Dad died in 1983.  After the funeral, they asked if they could move into the old farmhouse. "Until we get back on our feet" was the way "Ralph" put it.

Somehow they never managed to get back on their feet.  Maybe the loss of Ralph's foot to diabetes had something to do with it. Anyway, Ralph lived there--rent-free--for the rest of his life, probably ten or twelve years.  Norma continued to live there alone until 1999. The insurance company refused to renew the insurance, so our niece let the local fire company burn the house down as a training exercise in 2001.


Norma and Ralph  knew how to live off the land, even though it wasn't their land. Ralph gathered all the wild ginseng he could find and sold it to dealers. He also trapped a wild turkey and broke its wing, proudly explaining to my sister-in-law that he was using it as a decoy to lure other turkeys. My sister-in-law was furious. After she threatened to report him to the game warden, the turkey quietly disappeared. Ralph and Norma disingenuously asked my husband if he had made off with their turkey.  Before its disappearance, it guarded the place ferociously. When my husband once rolled down his car window to talk to Ralph, the turkey rushed up and pecked him on the arm.

Which brings me to Joey, who was first their dog and then ours. Joey actually lived with their son, Eddie, who had a mobile home across the pond. Eddie kept Joey tied up outside and threw dogfood on the ground when he thought of it. Eddie had a girlfriend in town, so he wasn't home much. One day he told Dad that he could no longer keep Joey and had taken him to the pound. Dad sprung him in the nick of time and he became our dog. When my husband went out to Ohio to plant trees, he'd take Joey along. On one of these visits, he stopped the car to talk to Ralph.  "There's my old pal!" Ralph boomed, reaching into the car to pet him. "Grrrrrrrr," said Joey, backing away.


During the eighties and nineties, no one in our family allowed deer hunting on the farm. We found out later, however, that Norma issued hunting "permits" behind our backs, collecting fees from all comers. My husband never knew about this until the game warden called him in Maryland to ask him if he wanted to press charges against a group of about 2 dozen hunters he caught trespassing on our land.  Norma was playing a risky game. One guy--a local legend-- refused to pay her fee.  When Norma told him he couldn't hunt, he cooly raised the barrel of the gun and pointed it straight at her.

Even after she moved into an assisted living facility, Norma continued to share ownership of the land with us in her own peculiar way. Our sister-in-law recently asked a group of strangers what they were doing on her land. They said, "Oh, Norma told us that we could hunt for mushrooms here."

Note in a Bottle 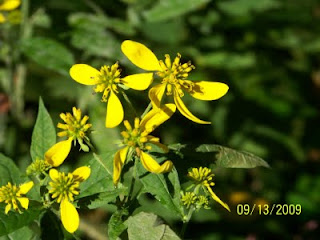 We just got home from a weekend at our place in Ohio.  On a walk along the banks of the Mohican River, we found a plastic water bottle with a note scrolled inside. The note-writer's misspelled words are italicized.

Im camping.
Im 10 and tomorro is my birthday.
Yes, I can't what.
I love trees and animals.
Hope your having a good cano trip or day wichever.
Bye bye.

The weekend started on Saturday morning with a bang when I toppled backwards off my stepper. I twisted my left ankle while doing an exercise that was supposed to improve my sense of balance. Lucky I didn't break my neck. I couldn't put weight on my foot for the next two days.

I was able to hobble into Einstein's Bagels, where we had breakfast. I ordered 4 dozen bagels for our church's Help-the-Homeless Miniwalk on Sunday morning. After breakfast, I went to a crafts workshop at church to make items for the Holiday Bazaar in November. There were several projects to choose from---decorating miniature Christmas trees, creating stuffed animals, crafting embroidered handbags, or beading.

I decided to try beading. Everyone in our group, except for the leader, was a rank beginner. I was an "all-thumbs" rank beginner. Arleen showed us how to make a simple pair of earrings. Some of the others were already on their second pair while I was still trying to figure out which way to bend the wire on my first. Arleen was very patient. I spent the next three hours making a necklace in various shades of blue and turquoise. I really enjoyed stringing the beads in a pattern that emerged as I went along. It kept me off my feet.

Email ThisBlogThis!Share to TwitterShare to FacebookShare to Pinterest
Labels: Kultziness

We're going to our cabin in Ohio over Columbus Day weekend. We'll get off I-77 at Route 39 and head west through Sugar Creek, Walnut Creek, Berlin, Millersburg, and Nashville. On the two-lane highway between Walnut Creek and Millersburg, we'll see lots of Amish buggies. Berlin, in fact, has become a center of Amish tourism; the population of Amish in Holmes and surrounding counties is among the largest in the country, and is said to rival that of Pennsylvania.

One soon notices variations in dress among the various groups. Here goes a young woman dressed head-to-toe in black, wearing sturdy black oxfords, and there goes a gaggle of giggling prayer-bonneted teen-agers in pastel dresses and flip-flops.

Driving through Millersburg years ago, when our older daughter was five, we saw an Old Order Amish woman crossing the street with an identically-dressed toddler in tow. "Look, Mommy," said Margaret, "a baby nun!"
Posted by Cynthia at 1:27 PM 2 comments:

Our younger daughter is one of those people who can have everyone in stitches just by the way she talks about incidents in her life.

Once, at a party, she told a story that had everyone laughing. Later, an older man sidled up to her and said, self-importantly, "Let me clue you. Men don't like women who are funny."

A bit taken aback, she made no reply. Now she wishes she had cooly retorted,

"Let me clue you. Women don't like blowhards."
Posted by Cynthia at 7:34 AM 3 comments: