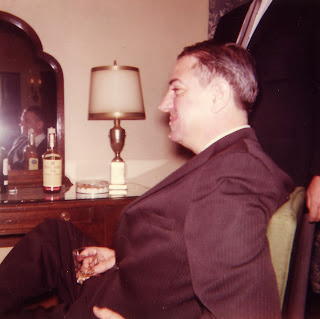 Phil and I got engaged at Christmas, 52 years ago. I was 21; Phil, 22. When Phil told my father that we wanted to get married, tears sprang up in my dad's eyes.


This reaction took me by surprise. Ours was never an easy relationship. I moved back in with him and my new stepmother when I was nine. I didn't like it when he drank.  He insisted that the few drinks  he had each day were not the problem. It was I who was the problem. One night, after he'd had more than a few, he told me he would have been far happier without a family. No worries, no demands. Just freedom to do as he pleased.

I never bought the idea that his drinking was my fault. The town was awash in booze. Everyone drank. All the time. The adults in my parents' crowd didn't have that much time for their kids. They worked hard and went to parties or to the club on weekends. Kids were expected to go to school, get passable grades and stay out of trouble. Parents didn't want the police or untimely babies showing up at the house.

Dad was a respected lawyer and civic leader in our small town. People liked him. He was kind. One summer I filled in for his vacationing secretary. He had me type some overdue bills. He saw a bill for $40.00 on my desk.  "Don't bother sending this one, " he said, "I know they can't pay it." I loved him for that.

He had a goofy sense of humor. When telling a joke, he'd often start laughing before he got to the punchline. Then there were the wild and silly games of "Mechanical Man" we played when he first married Mom. In our house, living room, dining room and kitchen formed a circle. Shrieking with laughter, Mom and I would dash through the house, trying to escape the clutches of the Mechanical Man who'd come after us, hands stretched out in front, humming and marching slowly and relentlessly. One time Mom and I slammed the door between the dining room and kitchen and raced into the living room. We could still hear him grinding away, but what was keeping him? We sneaked up from behind and found him stalled at the slammed door, marching in place and humming. As soon as he heard us, he executed a smart 180-degree turn and the chase was on.

So there's that. He could be warm and funny one day and cold and distant the next. The distance between us widened as I grew older.

After Christmas break, Phil and I got on the train to go back to school. We left my dad standing on snowy platform. As the train pulled out, Phil said, "He really loves you, you know."

And I loved him, but I never had another chance to tell him.  Before a month had passed, he died in a plane crash.

Email ThisBlogThis!Share to TwitterShare to FacebookShare to Pinterest
Labels: Family, my dad

Part of the fun of sending Christmas cards is re-reading last year's Christmas letters. Our friend, Bill, wrote about the Thanksgiving of 2012:

"I need to tell you about Thanksgiving Day this year. J (their daughter) always prepares the turkey. She was up and got the turkey in the oven and was feeling great about how things were going, so decided to set the table. She put a cloth on the table and eight dinner plates from the set she inherited from her Grandmother Eicholtz. As she walked away from the table, the cat came running past and jumped on the table. The cat missed, but caught onto the table cloth and pulled all the dishes to the floor, breaking all eight plates. Although it was a discontinued pattern, J was able to find the plates and has replaced all eight broken plates. And yes, the cat is still alive! "
Posted by Forsythia at 1:57 PM 2 comments: