We may get out today.
The snow shrinks down, compacts.
Yesterday's igloo blocks
Have turned to whited bricks.
Paved tracks appear on the street.
Perhaps the paper will come
And maybe some ads, some bills, a letter.
Posted by Forsythia at 8:08 AM No comments: 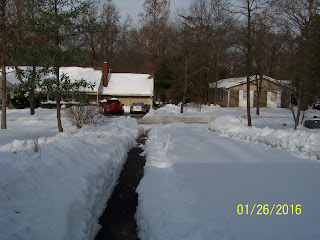 When the snow was still young and exciting,
Boys came up the street with shovels,
But my husband waved them away.
"I've got this," he said.

The snow kept coming
and when it stopped
it settled into igloo blocks.
Slowly slowly melting,
it still stands one foot tall in the driveway.
The car is stabled like a restless horse.
No line dance class for me today.

The pie is gone.
The milk is soon to go.
No morning paper.
No afternoon mail.
Just the drone of CNN
with Hillary, Bernie, Donald and Ted.
Who cares?

Did some laundry.
Steam-cleaned the carpet
Of two years' dog spit-up, coffee slop-spots,
And stubborn goo.
Who cares?

Played "beer" on Scrabble for 14 points.
Who cares?

The sky is leaden,
The sunshine doubtful, pale and wintery,
Like the smile of a Puritan divine.
Who cares?

Posted by Forsythia at 10:37 AM No comments:

Well, we survived. They're saying we'll be allowed out on the roads by Wednesday. The populace seems to be heeding the official advice. Church was cancelled today for me and many others.

It started snowing around noon on Friday. Schools were closed for the day and the Senior Center closed at noon. Snow continued all night, with a blizzard and hurricane-force winds predicted for Saturday. That didn't happen, but we ended up with over two feet of snow. Friends with ocean-side property watched helplessly as the storm tore away the pier in Ocean City and caused floods in Lewes, DE. 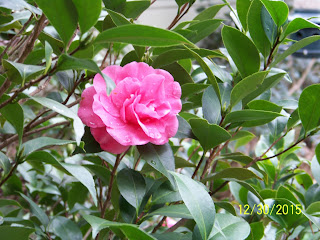 This camellia bloomed by our porch during the warm spell around New Year's. 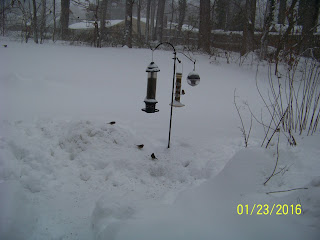 I scared most of the birds away when I took this picture.
Sometimes more than 40 birds were clustered at the feeders.

It's white and it's pretty. We spent the day shoveling short paths to the bird feeders, keeping them filled and fostering a culture of dependency on our Feathered Friends. Dilly Dog romped to the back fence once and called it a day. She snoozed on the couch while we watched Immortal Beloved, a DVD about Beethoven and his alleged love affair with his brother's wife. I cooked barbecued ground turkey in the crock pot and baked a cherry pie, hoping that the power would stay on. Talked to the kids on the phone. One lives nearby and the other in Northern Virginia. All is well. 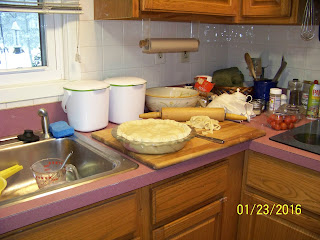 Happy to say that the power stayed on!


Now comes the Digging Out. The neighbors across the street spent a lot of time this morning moving their four cars to the street so they could clear the driveway. The black car got stuck in the street and required a lot of back-and-forth rocking and shoveling to get it back in the driveway

We played on-line Scrabble with my sister in Chicago. Her talent at this game is positively demonic. We are drawn into new games again and again. We managed to win yesterday's game, but it was the two of us against the one of her and we barely squeaked by. A new game has started and we will probably go down in flames once more.

Also started a new jigsaw puzzle, a 300-piece Ravensburger with large pieces. Two months ago, we learned our lesson with a 1000-piece puzzle that soon had us wailing and gnashing our teeth and wanting to cast the puzzle into the Outer Darkness. With great joy we finally tossed the thing in the recycling bin. 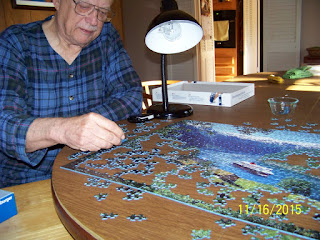 The Puzzle We Threw Out

I finished two books--The Burgess Boys by Elizabeth Strout and The Scarlet Letter by Nathaniel Hawthorne. I also did seventh grade math problems on line. I started this project last year when our grandson was in sixth grade and struggling with math. I'd hoped to help him with  his homework. It turns out he didn't want my help and has pulled himself out of his downward spiral on his own. Still, the last time I took math I was a silly girl who often cried and threw her math book across the room. Now that I am an old girl, married to a patient mathematician, I don't get nearly so frustrated. I actually enjoy math. Somewhat. I hope to stay with it until I finish 12th-grade math, if I don't get dementia in the meantime.
Posted by Forsythia at 5:37 PM No comments: