Babe at the Beach 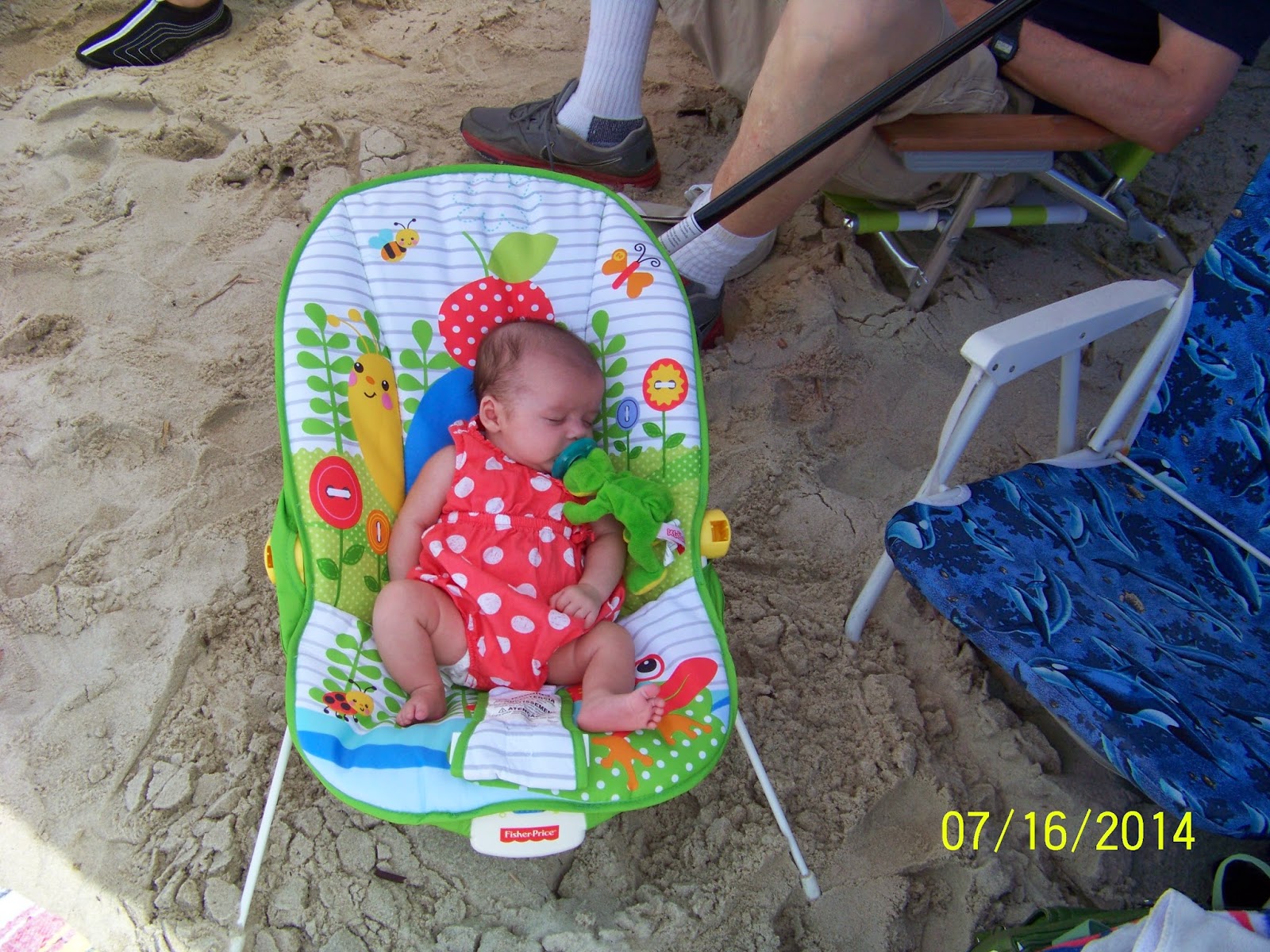 Our family goes to the beach every July for a week. A lot can change in a year. Last July, our younger daughter, Becky, arrived at the beach a little discouraged about a potential adoption. Something just didn't seem right. A young woman in Indiana had contacted her and her husband on the adoption agency website and told them that she was expecting a baby girl in August. A social worker in the agency's Indiana office attempted several times to meet the birth mother at Taco Bell, but the young woman would never show up. There was always some excuse. "I was there. I must have been the restroom when you came in and that's why we missed each other," she explained. After several more no shows like that, the social worker concluded that there was probably no baby.

Becky and Tom were beginning to think that adoption might not happen for them. They had applied to adopt when their natural son, Nate, was about three, and he was about to start kindergarten. They were in their mid-forties. Many birth parents seemed to be looking for younger couples.

In January, a young couple found them. The woman already had two children by a previous marriage. She and the baby's father felt they could not afford a third child. The paternal grandparents, however,  were adamantly opposed to the adoption. Despite the red flag, Becky and Tom went shopping for their newborn, which was due in early April.  On the morning that they were on their way to the hospital to pick up the baby, the agency called to tell them that the birth parents had decided to keep their baby girl.  Heartbroken, they returned the diapers and bottles to the store and laid aside their dream. "If it happens, it happens, but it probably won't, " they said.  They decided to let their contract with the agency lapse when it came up for renewal in August.

Toward the end of May, the adoption agency unexpectedly called Becky and Tom with exciting news. A newborn girl was available for adoption. Were they still interested?  They had 24 hours to decide.

They talked it over. They were almost getting used to the idea of a family of three, plus Roscoe, the beagle. They knew their lives would change forever. They said yes.

The baby was 3 weeks premature and weighed less than 5 pounds. She had to spend nearly three  weeks in the hospital before being allowed to come home. One parent or the other visited her nearly every day, to feed and cuddle and rock.  Her grandparents and aunt also went to see her.  And then, one day in mid-June, she finally came home.

Last week, she went on her first beach vacation to Lewes, DE, with her extended family. She mostly slept, gazed around and slurped up milk, little dreaming how much joy she was bringing to the rest of us. 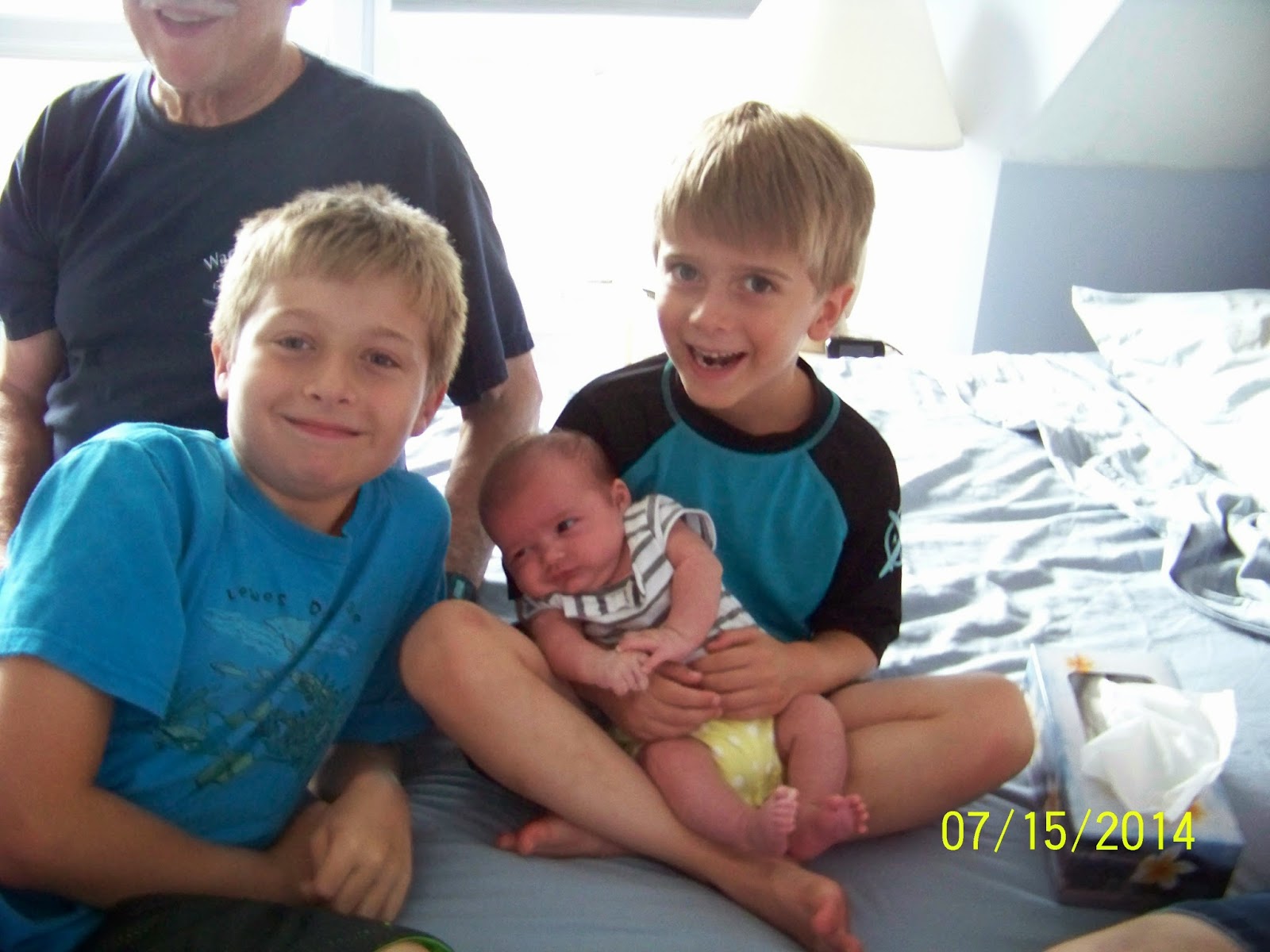 At the beach: Mariel being held by her brother, Nate,
with cousin, Andrew
Posted by Cynthia at 4:49 PM 4 comments: 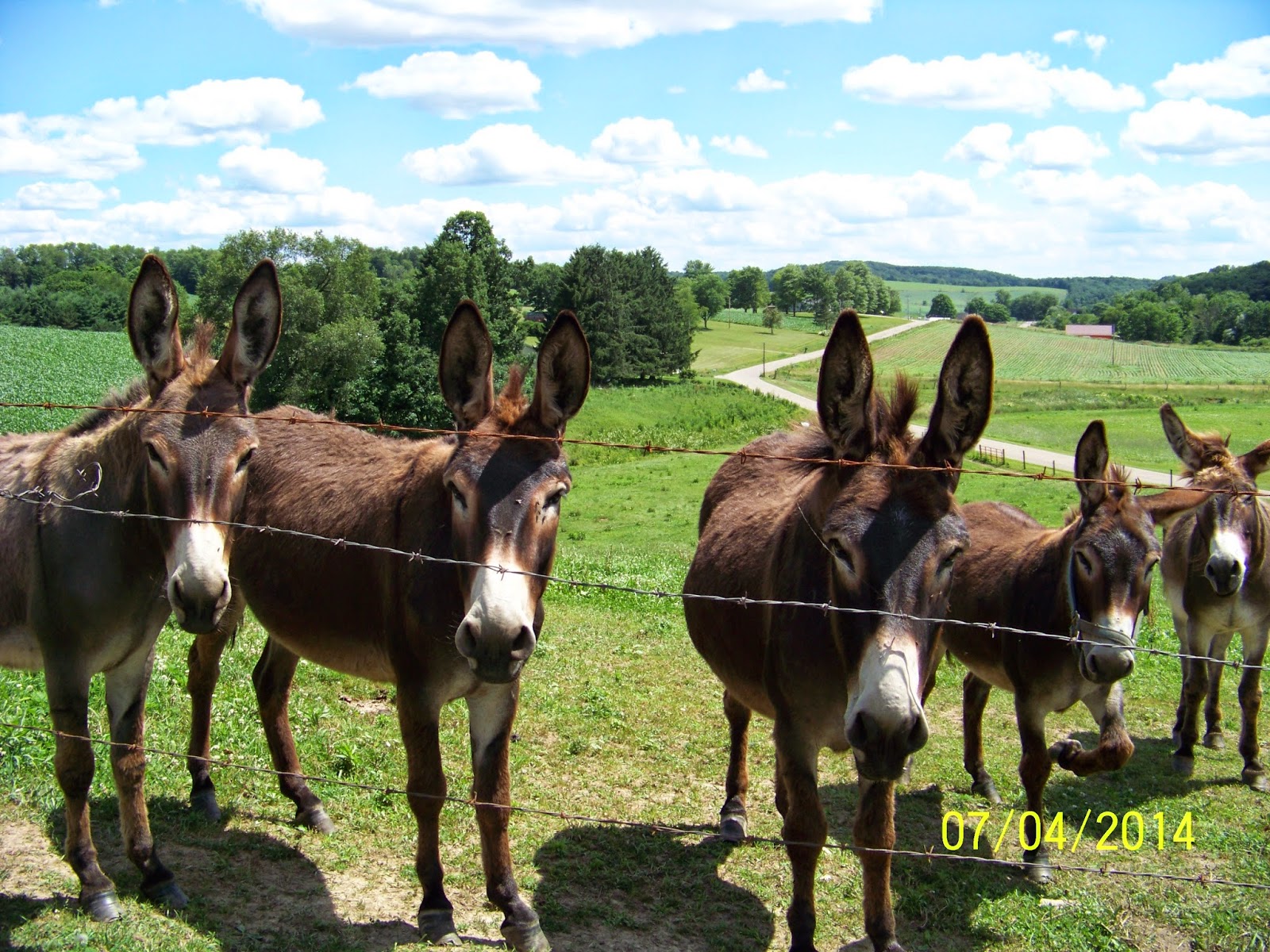 We just got back from a wonderful week at our cabin in Ohio. It wasn't as
"muggy and buggy" as it usually is in July.

One afternoon, after planting geraniums at the cemetery, we took a side trip on the way home. When we saw some grazing horses, we stopped to take their picture. The "horses" turned out to be friendly and curious donkeys.

Earlier that day, on the way to Mount Vernon to buy the geraniums, I saw a "calico cow". Yes! Its legs and its body just above the legs were black and the rest of it was tan and white. We kept going, thinking we'd take its picture on the way back. By the time we returned, the "cow" (could have been a male calf, I suppose) was nowhere to be seen, of course.

Phil's sister spent the night, Phil's cousin spent the day on Sunday and a neighbor came for dinner another day. We watched yellow finches at the bird feeder, saw a few deer and spotted "our" blue heron, who hangs out at the creek. Phil scared a baby duck when he crossed the bridge tapping his walking stick. The duckling took off like a rocket, paddling and squawking frantically. Phil then heard a commotion up the creek, as if the members of the duck family were trying to find each other.

I slept out on the screened porch one chilly night. The stars were bright. At dawn, birdsong! Maybe 20 species of birds sang and chirped for an hour or so, and then, as morning came on, the chorus abruptly fell silent. A week at "the farm" shows me how far removed I am from the natural world most of my days.
Posted by Cynthia at 9:26 AM 2 comments: