We Got Off Easy

The wind blew the screen out of the door and the rain is filling the air ducts the way it always does during a big storm. We're pumping the water out to the street. When I look at the devastation visited on Ocean City and other coastal communities, including New York City, I know we got off easy. Still,  I wonder if climate change had anything to do with making this storm worse than it might have been. It will be interesting to see what the experts have to say about Sandy.
Posted by Cynthia at 11:53 AM 1 comment:

Outside our window, the tall stalks of the Jerusalem artichokes are waving frantically to us. HELP!  Take us inside! PLEASE!

Sandy is making landfall later today.
Posted by Cynthia at 8:46 AM 1 comment:

The Silly Goose of Mt. Gilead

So here we were on our way back to the cabin from Marion, OH on two-lane Ohio State Route 95. Rounded a corner outside Mount Gilead, when whoa! What was this?  A Dodge Ram pick-up was stopped just ahead of us. Its caution lights were blinking. Oncoming traffic was stopped as well. A young Amishman  alighted from the passenger side of the pick-up. Flapping a green handkerchief, he tried to herd a large white goose to safety. The silly goose waddled resolutely up the highway, stubbornly hugging the center line. Sometimes it would head briefly to one side of the road or the other. Five minutes passed. Everyone waited patiently. No one honked, not even the goose. Finally, the man managed to shoo it into someone's yard. He climbed back into the truck and we were off.

We had just come from dinner with my college friend, Mary Jane, and her husband, Byron at the Red Lobster in Marion. This is the third straight year we've met. They're from Lima, OH and our cabin is near Danville, OH, and Marion is in between.

Marion is the birthplace of Warren Gamaliel Harding, the 29th president of the United States. The first year we got together, we arranged to meet first at the Harding Memorial. The memorial-- a white, marble wedding cake--resembles the Jefferson Memorial, only it seems larger and grander. We wondered about this. Why such a grandiose memorial for such an allegedly mediocre president? Wasn't he supposedly the "worst president ever"?

Another former resident of Marion, John W. Dean--who was involved in a little scandal of his own  known as Watergate--attempted to show in his biography* of Harding that he wasn't that bad. Certainly others have been vying for the dishonor of being the "worst president ever" since Harding's day. Who knows? By the end of the 21st century, historians may well have nominated someone else as  "the worst president ever."

John W. Dean, by the way, is a graduate of the College of Wooster, as are Mary Jane, my husband and I. According to Dean, William E. Chancellor, a racist professor at our beloved alma mater, tried to derail Harding's nomination by circulating a flyer stating that Harding had black ancestry. Although Chancellor's scandal sheet turned up at the 1920  Chicago convention,  it was ignored. This did not stop the Democrats of that day from distributing handbills containing Chancellor's so-called "research" during the campaign.  Plus ca change, plus c'est la meme chose.

The Other Horsey Set

We've just returned from a long weekend at our cabin in Knox County, OH. The weather was mostly cool and drizzly, but the sun peeked out occasionally. 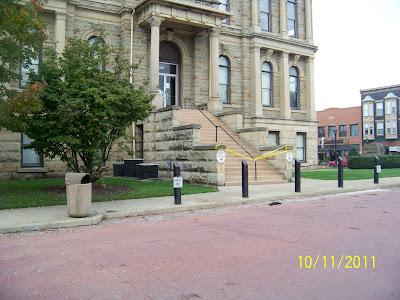 Knox and the neighboring counties of Ashland, Coshocton, Holmes and Wayne are home to many Amish. You often encounter their slow-moving buggies on narrow dirt roads or on paved 2-lane roads, where cars zip past them at 50 mph. Five hitching posts stand outside the Holmes County Courthouse in Millersburg. The sign says "Horses Only."

We saw this lineup of buggies in Berlin, OH, where we always stop at a bulk-food store owned by old-order Mennonites. The buggy without the legally-mandated "slow vehicle" triangle belongs to a member of the conservative Swartzenbruber group. 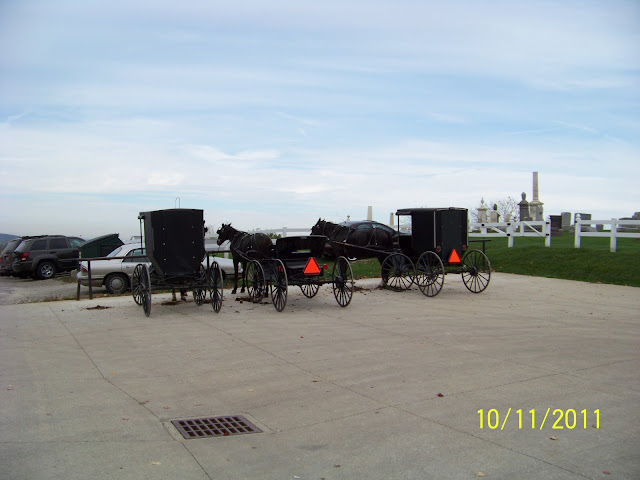 As part of Appalachia, eastern Knox County has some hills to reckon with. We recently found ourselves creeping up a steep grade behind a buggy carrying the parents and 3 or 4 kids. From what we could see, the horse had extremely slender ankles. It seemed to be struggling. Then, as it neared the crest of the hill, it sped up! Our Knox County neighbor, David, said, "Oh, that's a pacer."

David replied, "That means it's not a trotter. It puts down both hooves on one side at the same time." 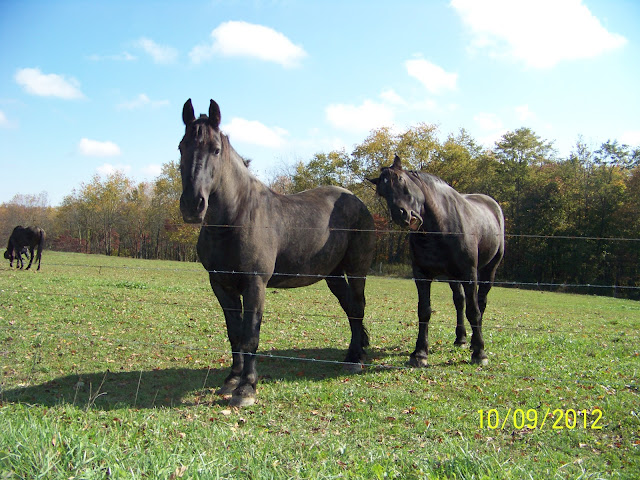 On Monday, we stopped at the Amish farm where we buy eggs. We saw a half dozen magnificant draft horses on the way up to the house. "Percherons," I said. My husband confirmed it with the egg lady.


My husband was impressed. He later asked, "How did you know that?"
"You just pick these up things," I said, airily.  I like to read the horse ads in The Vendor, a biweekly newspaper for "plain folk everywhere." Phrases like "a good boys' horse" or "nice horse for taking girls to Singing" intrigue me. I reminded him of the time some other Knox County neighbors, "English" like us,  fell in love with a horse named "Dutch." They had gone to the auction not intending to buy, but soon found themselves bidding against a couple of Amish men for a beautiful Percheron. They won the bid. The minute they got home with their prize, the phone was ringing. It was the Amishmen, offering to board the horse for free in exchange for letting him "stand at stud, " as they say. 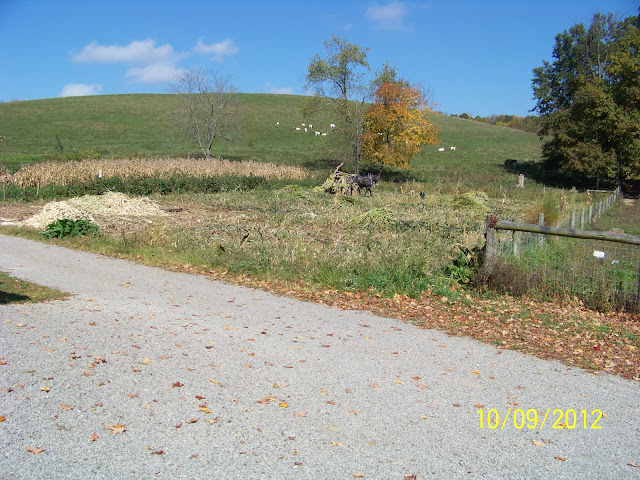 After buying our eggs, we went to the Amish bake shop for apple dumplings and a carrot cake. In the adjacent field, a straw-hatted Amishman was stuffing long stalks into a wooden contraption while a horse walked round and round it in a circle. We asked the bake shop girl what they were doing. "Pressing sugar cane, " she said.

Posted by Cynthia at 1:49 PM No comments: