Ghost Month by Ed Lin
My rating: 4 of 5 stars

Jing-nan sets out during an inauspicious month--August, when the dead return to the land of the living--to find out who murdered his childhood sweetheart. What you really get when you read this book is a glimpse of Taiwanese culture--the tension between the aboriginals, the old settlers from south China and the Chinese who came after WW II. Then there's the gods, the gangs, housing, corruption, entrepreneurs, the CIA, music and the immoveable feast at Taipei's night market. Who knew such a vibrant culture existed on this small island that is home to 23 million?

Posted by Forsythia at 8:24 AM No comments: 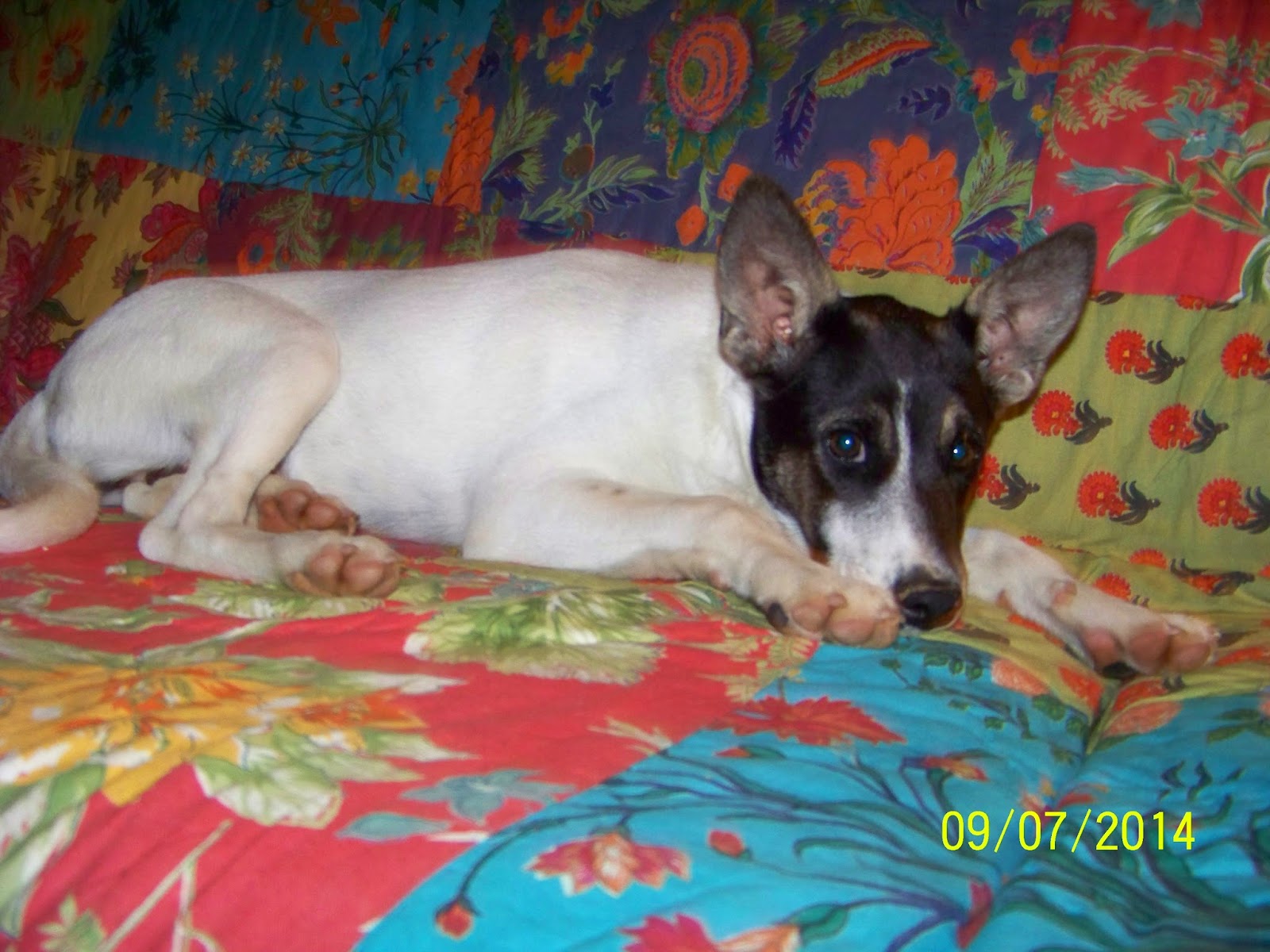 Her formal name is Dilberta Chase, but we call her "Dilly." We bought her the day after Labor Day from an Amish farmer. Although the Amish are notorious for running puppy mills, this is no puppy-mill pooch. The farmer had just two mixed-breed farm dogs, a male and female. He said he did not know who Dilly's father was, only that his dog could not be her daddy. She didn't look like him or any of the other puppies.

"Gee, I dunno. So much goes on around here. I think maybe 4 months," he said.

This farm is where we buy eggs when we're at our cabin in Knox County, OH. When Phil had gone to get eggs on Saturday, he was smitten by a small, brown puppy. He told me about him when he got home, mentioning that he had a larger, white littermate. I said, "I don't really like white dogs."

"Why not?" asked Phil's sister.

"I don't know. I just don't. I don't like white horses or white cats either."

Tuesday morning when we were getting ready to return to MD, Phil said, "I keep thinking about that little brown dog."  We both agreed that now was not the time to get a dog. We have an ailing cat and Phil is looking at knee replacement surgery before Christmas.

"We can stop at the farm on the way home to see if he's still there, " I said.

Up the gravel drive we went. Six horses stood outside the red barn, watching. A pair of Holsteins paid us no mind. The little brown dog ran out to greet us.

"We're kind of thinking we'd like to keep the brown dog," the Amish man said.

"Sophie's usually here with Stan," he replied. "I don't know where she is now"


We called. He called. No Sophie. After a few minutes, we decided to leave, when suddenly she appeared. She was cute. Her head was black and she had a black spot above her tail. "I guess it's OK if she's mostly white, " I said.

The Amish man told us she'd had a "Seven-way shot."

"How much do you want for her?" asked Phil.


So "Sophie" was ours. The two of us sat in the backseat, as Phil headed east on Route 62 toward Millersburg. Before long, "Sophie" began going "ack-ack-ack." She vomited up her entire Amish farm- dog breakfast plus something else all over my capris. A bird?  A mouse?  A  vole? This was why she'd briefly gone missing. She'd been scouting for "field greens," but in her case, it wasn't delicate vegetation she wanted. Instead, she'd searched the fields for this delicacy, which was green because it was dead. She vomited again and again. And again. I screamed.  Phil pulled abruptly off the road.  He snapped on a leash and whisked the puppy out of the car. We happened to have  stopped by a bubbling spring. Before we could stop her, she waded right into the water that pooled beneath the spring.

Using half a roll of paper towels, I mopped vomit off  the quilt, the cooler and the silvery folded-up sunshade. Then I fished a pair of grubby capris out of the "dirty-clothes" bag. I changed into them between two open car doors while milk trucks whizzed by.

As soon as we were on the road again, Sophie settled down for a long nap. We agreed that we couldn't call her Sophie. Close relatives had had a beloved dog named Sophie and she had died.  Our puppy needed a name before her first visit to the vet, which would happen the next day if at all  possible.

She's going to be a wonderful pet.