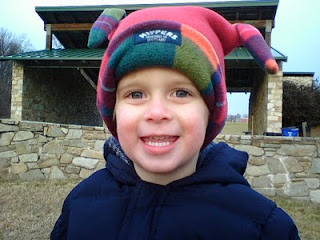 Rush to Judgement, or Who Asked Him?

The Great Fathead recently weighed in on the subject of the First Lady's sparerib dinner. He accused her of choosing clothes that hide her real waistline. At least she has a waistline. Did you see the photo of Mr. Blimpbaugh in an oversized pastel blue T-shirt that barely concealed his pot? Someone should clue  the pignoramous in on the slimming effect of darker colors.
Posted by Cynthia at 8:39 AM 2 comments:

Email ThisBlogThis!Share to TwitterShare to FacebookShare to Pinterest
Labels: Politics

A Love Story, of Sorts

It was the autumn of 1933. My mother, Mary, had just started studying piano at a college in Kentucky. Grandmother received a phone call from the dean's office. "Your daughter's been taking the bus to Pittsburgh every Friday evening. We think she's meeting a man."
Grandmother had a good idea who the man was. Mary was being pursued by a young law student she'd met at a picnic during the summer. Grandmother and Grandfather left for Pittsburgh in the middle of the night, driving over 100 miles from their farm near Cambridge Springs, PA. They reached the bus station at dawn. Just as expected, they found my father waiting for the bus. Grandmother said, "Are you by any chance meeting the same person we are?"
Both sets of parents were furious. Kenneth still had a year of law school at Pitt; Mary was barely out of high school. The young folks assured their elders that they were already married. No matter. They had to be married again by the Methodist minister.
The marriage lasted thirteen years. Kenneth wanted to build a successful law practice, enter local politics, and make lots of money. He thought Mary would be perfectly happy working at his side as his secretary. Mary wanted a family; Kenneth, not so much. Mary liked to read and play the piano. Kenneth liked to go to parties. Mary hated all the drinking and flirting that went on at these parties. If there was a piano in the house, she would sit and play until Kenneth was ready to go home.
In 1940, I was born, despite my dad's plans to put off having kids indefinitely. Although I was a surprise, he seemed delighted to have a baby daughter. He told Mother, however, that  he wanted no more surprises. He was therefore not pleased when my sister arrived in 1942.  Our parents were divorced in 1946. Dad asked Mother not to leave until after New Year's. He wanted to have one last party at their house. She agreed.
Mother and my little sister moved to Miami with Mother's second husband.  I lived with Dad's parents until he remarried in 1949. I'll say this about him: he never said one mean word about Mother. Nor would he allow his mother to criticize his "ex"  in my hearing. He'd say, "Mom, don't say that. She's Cynthia's mother."
When I was seven or eight,  he took me to Hunter's News Room to buy Mother a valentine. He found a card with a  satin-covered sachet, shaped like a heart. "Why don't you get her a card that smells?" he suggested slyly, knowing that the pretty clerk was listening.  She laughed and said, "Watch out what you say about our cards, Kenny."
Posted by Cynthia at 7:49 PM 3 comments:

Email ThisBlogThis!Share to TwitterShare to FacebookShare to Pinterest
Labels: Mother and Dad

Still the Year of the Cat 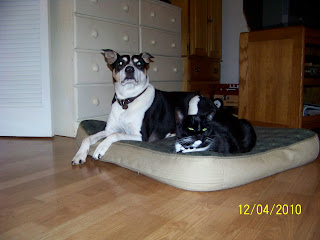 When I told the Cat of Cats that the Chinese calendar's Year of the Cat would end tomorrow, she coldly replied, "Every year is the Year of the Cat." Here she is with her hapless and clueless pitbull brother, Ramsey.
Georgie has found yet another way to tease him. He has a chair. This stained, broken-down orange monstrosity is over 65 years old (I'm talking about the chair here) and should retire, but Ramsey loves it. So it sits in our family room. I've hidden its bulky presence under a light-weight fawn-beige "throw."  Twice this week, Georgie has weasled her way under the throw, creating a small lump in the corner. Ramsey is completely flummoxed. He puts his feet on the chair, nudges the lump, and whines. After a moment or two, she hisses indignantly and shoots out from under like a rocket. He looks vaguely guilty.
Do you think she's deliberately tormenting him?
Posted by Cynthia at 8:05 AM 4 comments: