Serpent of the Lord 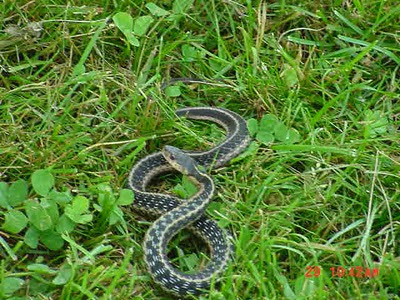 Life in an Extended Family Commune

Welcome to the Commune. There is no guru here, just four quasi-adults, one two-year-old, three dogs  and two cats.
Tom, Becky, our daughter, and Nathaniel, our grandson,  moved in over the weekend. That is to say, they brought their three dressers, clothes on hangers, and a half ton of food. Our freezer is crammed full. Ditto the refrigerator, and there is still food in their College Park refrigerator. We are going to consume all this in the next three weeks. I am having frozen organic samosas for lunch.
Two loads of laundry will be done today. We will dine on a $14 organic chicken tonight  (Becky was afraid it would be "spoiled" because she started thawing it on Friday.)
Tom leaves on Wednesday for a 4-day concert tour. In early June, the army band will go to Hawaii for 10 days. Tom will be gone on June 7th, the day they are moving into their new house.  Becky is a bit frazzled. She just called to ask me if the blue plastic container containing Nathaniel's breakfast was in the driveway or the street. She had put it on top of the car and driven off.
It wasn't.
Yesterday the two cats had a chance encounter before being properly introduced. It wasn't pretty. Somehow Clarence (their cat)  got out on the screened porch where Georgie was holding court from the penthouse of  her cat condo. The next thing you know, she stretched her neck over the side of her perch to get a better view of the stranger. Then she flew at him and grabbed him viciously around his middle. Clarence fled into the "apartment" in terror and later threw up on the bed.
Posted by Cynthia at 11:25 AM 4 comments:

Jake to the Rescue 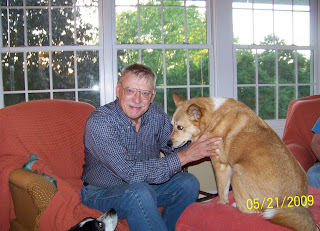 Last week the house up the street was destroyed by fire. A gas-line leak is suspected because two  explosions rattled the neighbors' windows before the fire broke out. Fortunately, no one was hurt, but what a heartbreak to lose irreplaceable items such as family photos and heirlooms.
Nearly three years ago, my husband's sister also lost her house to fire. She and her husband escaped unhurt, along with their three dogs and about half of their fifteen cats. (A faulty extension cord in the four-season room caused the fire.) Their dog, Jake,  nudged them awake around 5 AM, moments before the smoke alarm went off.
Jake is the big dog in the picture which we took during our first visit to my in-law's new house. Ramsey, our pitbull, seems to be anxiously wondering how Phil and this other dog came to be such pals.

Phil and Jake met several years earlier, when Jake was a mere pup. At that time, Phil was busy with  our cabin-building project in Ohio. He accepted an offer to stay in a neighbor's cabin for the weekend. Arriving after dark, when everything was pitch black, he was startled to hear ferocious barking from the direction of the darkened cabin. It sounded like a dog to be reckoned with, but when Phil beamed his flashlight on the porch, all he saw was a scrawny little mutt, no bigger than a fox.

That's what he called him: "Fox." Fox was guarding the cabin with fierce loyalty. He might have been abandoned, dumped out of a car on Route 514. Somehow Phil managed to slip through the door without being attacked. He spread some stale bread with mayonnaise and tossed it out on the porch. Fox inhaled it. He then wedged himself into the tiny space between the window grille and the glass to be as close as possible to the his new friend inside the cabin.

The next morning Phil drove six miles to Danville for dog food. Fox gobbled it up and stayed close to Phil all day. On Monday, Phil had to return to Maryland. What to do with Fox? He could hardly come home with Phil. At least not that day. We already had a crotchety, old beagle, Arlo.  Plus my Mom. Mom was very protective of Arlo's rights as a senior citizen. She would certainly have objected to "upsetting" him by introducing an energetic, new puppy.  Mom also had an ancient cat that couldn't stand "too much noise and confusion."

Phil discussed the situation with his sister, who lived in Marietta, OH. She and her husband already had two dogs and about a dozen cats. Nevertheless, they agreed to keep Fox temporarily. Fox rode all the way to Marietta with his chin resting on Phil's knee.

A few days after Phil got home, he called his sister for a report on Fox. His sister said that they had changed Fox's name to Jake and that he was doing just fine.  He was getting along well with his four-footed siblings.  So Fox had found his new family. But he never forgot Phil.
Posted by Cynthia at 10:36 PM 1 comment: