At Our Cabin in Ohio 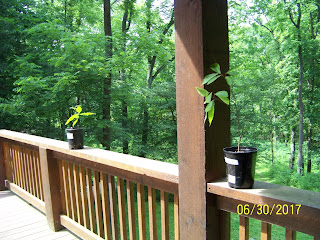 Over Memorial Day weekend, we went to our cabin in Ohio. We started a day later than planned because, on Saturday night, my husband sank deep into our daughter's super-soft sofa and later had to struggle a bit to extract himself.  The next morning, on the day we planned to leave, he woke with an aching back.  So we drove to Ohio on Memorial Day instead.  It's a nine-hour trip.

This picture from last year shows a couple of American chestnut plants. The American Chestnut Foundation is trying to breed a blight-resistant chestnut. My husband has planted over thirty seedlings near our cabin. Of these, over 20 seem to be blight- resistant, but he's had to destroy a half dozen that became infected with blight. The only thing he's planted so far this year were geraniums a his parents' gravestone at the chapel cemetery.

The pink and purple wildflowers--dames' rocket--were very pretty, along with a profusion of yellow buttercups and white multiflora rose. I admired what I thought was a blossoming tree on the bank behind the cabin. Turns out  it was not a blossoming tree at all, but either a walnut tree or a tree-of-heaven with multiflora rose weaving its way through its branches.

A pair of phoebes built a nest on the eaves under the porch. While the female sat on the eggs, the male entertained us by catching flies mid-air and hovering over the nest to bring them to her. Their song was the only one we could separate out from the cacophony of birdsong at the cabin.

We don't have the internet at the cabin and our cell phones don't work either. We have a TV, but we're not hooked up to cable or satellite, so it's just for watching videos.  We listen to WKSU, the FM station operated by Kent State University.