This morning my husband suggested that gun owners be required to have insurance just as car owners are. Can't you just imagine the conversation between Flo and a potential customer?

Customer: Never had a gun go off accidentally.

Customer: Lifelong member of the NRA.

Flo: Oooooo! Discount! Do you own more than one?

Customer: Sure do! Two hunting rifles, three assault weapons, a couple Glocks, a--

A Fool and Her Money May Soon Be Parted


Century Photo is up to its old tricks. It's too bad, too. It used to be a good company, but no longer.

I ordered about $100 worth of photo pages and an album three weeks ago. All I have to show for it is an order confirmation number. Called them today. It's an old story. "Your stuff is on back order. It will take four to six weeks."  I ask you:  what kind of photo-page company runs out of photo pages? Does McDonald's run out of hamburgers?  This is ridiculous. I told the customer rep to cancel the order. This she was not authorized to do, but she gave me a L-O-N-G and complicated e-mail address for "Laura," the person so authorized.

I am not at all happy that I entrusted my credit card number to Century Photo.

I'd ordered photo pages and albums from Century Photo for over forty years with no problems. About two years ago, things started to get funny. I was charged for a recipe holder that was on back-order for months. Finally, a customer service rep admitted that it was not and never would be in stock. Eventually I got a refund, but it wasn't easy to wring it out of them.

I should have searched the Internet for "Century Photo Complaints" before placing the order this time.  I did that the other day, and oh boy!
Posted by Cynthia at 3:24 PM No comments: 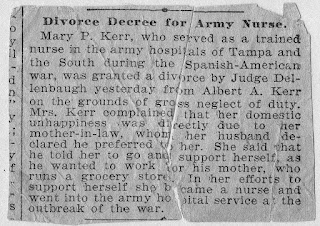 My husband found this old clipping among his mother's papers. The mother-in-law appears to have been my husband's mother's cousin. The newspaper notice dates from around 1900.


Mary P. Kerr, who served as a trained nurse in the army hospitals of Tampa and the South during the Spanish-American War, was granted a divorce by Judge Dellenbaugh yesterday from Albert A. Kerr on the grounds of gross neglect of duty.  Mrs. Kerr complained that her domestic unhappiness was directly due to her mother-in-law, whom her husband declared he preferred to her. She said that he told her to go and support herself as he wanted to work for his mother, who runs a grocery store. In her efforts to support herself, she became a nurse and went into the army hospital service at the outbreak of the war.

Email ThisBlogThis!Share to TwitterShare to FacebookShare to Pinterest
Labels: Family, The Divorce

Yesterday was Twelfth Night, the finale to the Twelve Days of Christmas and the day to take down Christmas decorations.

We didn't need more than an hour or so. We never made a big deal out of decorating and nowadays we do even less. Phil set aside about seven minutes before the start of the Redskins' playoff to take down the two strings of lights on the porch. I removed the artificial garland from the mantle,  the cards from the louvered doors, and the ornaments from the chandelier and the table-top tree. The tree went into the closet with the lights and tinsel still on it. I packed away the ceramic Victorian  house and the figures from the manger set.  I am LAZY.

The tree holds fewer than two dozen ornaments, but each has a story. We have tiny photos of the two grandsons in their Baby's-First-Christmas ornaments. Other ornaments recall trips to the Outer Banks and Chincoteague, our grandson's passion for fishing, a Sunday School project, lifelong interests (old houses, Japanese culture) and pets we used to have. We have ornaments given to us by friends who've gone on. One of our neighbors was a man born in Japan in 1926. In heavily-accented English, he once confided that, as a teen-ager, he was "preparing to die for Emperor." You hardly know how to reply to something like that. He and his wife had a shaggy mutt named "Whiskers." When he heard that a friend's pet had died, he said to his dog, "Whiska, I'm glad you're still a little boy." So he loved his dog, but he also got a tremendous kick out of Cruella Deville, the fur-loving villain of One Hundred and One Dalmatians.  Years ago, we somehow acquired a tiny plastic statue of Cruella. Every Christmas I remember Tatsuo when I place her beside our snow-covered ceramic house.

The few fragile Christmas tree ornaments that manage to survive Christmas with Kids get passed down from generation to generation. I was surprised to hear our older daughter say, "I'm glad I have at least one of Grandma's ornaments." I know that Phil's mother had two treasured antique ornaments, a teapot and a coffeepot painted with flowers. She gave them to his sister.  The ornament our daughter was talking about is a cheap, shiny red reindeer with a missing hoof.  I don't know where it came from, but I'm pretty sure it didn't come from my mother-in-law. Who really knows? Many a trinket probably owes its origin as a treasured keepsake to faulty memories.
Posted by Cynthia at 2:40 PM 3 comments:

Our parents were divorced in January, 1947. Mother told me that Dad liked to give a holiday party each year. He asked her to help him give one last party during the Christmas season of 1946 and she agreed. After the party, she and my four-year-old sister, Barbara, were to leave for Coral Gables, FL.  I was to stay behind to finish first grade and join them when school was out. At least, that was the plan, but it never worked out that way. Not the joining-them-in-Florida part.

I don't remember any tears or trauma. I was already used to living for long stretches of time with my paternal grandparents.  Anyway, I was more than a little afraid of Mother. She had a wicked temper. I was angry with her, too. One day, I found her crossword puzzle on the child-sized table in the kitchen where I ate breakfast. That table was often the scene of a power struggle. Mother would make me sit there until I finished my cereal. Grandmother (Mother's mother) said, "I'd drop in at 11 in the morning, and there you'd be, still sitting." Grandmother thought it was funny, but all I remember is the bowl of soggy cereal. Perhaps that's why I took a pencil that day and scribbled the puzzle black. Mother was furious. She spanked me. This is how parents handled insubordination in the forties.

My sister and I seemed to accept the divorce calmly. Barbara did not know about the potential new stepfather waiting in Florida. Her one question, before she and Mother left Meadville, was: "But who will cut my meat?"
Posted by Cynthia at 12:14 PM 2 comments: