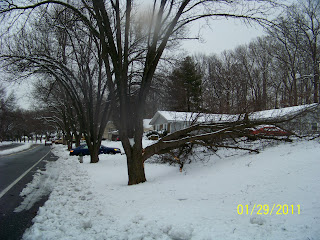 If your true love gives you a partridge in a pear tree for Christmas next year, you'd better check it out. If the tree is a Bradford Pear (BP), stay out from under. These trees are dangerous!
We have them throughout "Montpelier," a community of 750 Levitt houses built nearly 50 years ago. BP’s are fast-growing, showy trees, which were once the darlings of landscapers. They bloom spectacularly each spring. Other than that, they smell bad, provide no food for birds and crowd out native trees in the wild.  Worst of all, they are brittle.
The taller and older they grow, the more fragile they get. They shed branches with little provocation, dropping them on parked cars or strolling people. Sometimes a tree will split right down the middle, falling across a driveway or blocking a front door. One neighbor, who defended the BP for its beauty after my husband called it a “junk tree,” woke up the next morning to find half his tree lying in the street.
This week, we had three inches of heavy, wet snow. BP branches and half-trees still litter the landscape.
The BP was developed in 1963 as an ornamental tree by a scientist at the USDA station in Glen Dale,  Prince George’s County, MD.  It was adopted as the “county tree” by the County Council of Prince George’s County in the 1970’s. A resolution to disown the tree was introduced in 2008.  I can't find anything online that tells me the resolution was passed. My guess is that the County Council just wishes the whole problem would just go away.
Posted by Forsythia at 5:24 PM 3 comments:

Email ThisBlogThis!Share to TwitterShare to FacebookShare to Pinterest
Labels: The Tree Hugger

The shelter is full. The Winterhaven Board has decided that 30 men is the upper limit. Most congregations just don't have space for more. When the number approaches 40, trouble begins.  People get edgy. Fights break out. We're now at 32.
Which brings me to the problem of "Clarence."  He shows up every night with his "admit slip," has dinner, then retires to his van to sleep. Why is this a problem?  Having been accepted as a guest at the shelter, he is entitled to a bed. By refusing to sleep in it, he literally "freezes" someone else out of a bed.
He could eat at the local soup kitchen, Elizabeth House, before bedding down in his van. When Winterhaven was at our church a few weeks ago, I asked him why he didn't.   He waved his hand dismissively. "Elizebeth House!" he snorted. "They noodle you to death there." I guess he just doesn't like pasta.
Posted by Forsythia at 1:59 PM 2 comments: