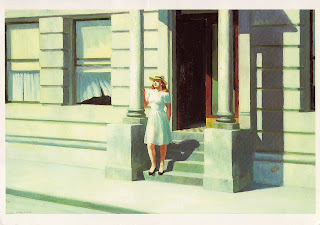 Our younger daughter spent most of 1994 in Colorado.  She was 28 years old.  She went to Colorado to learn more about life. She had been living with a boyfriend for several years and perhaps she wanted to gain some perspective on their relationship from a distance. I really don't know.

She spent this past spring sorting through her notebooks and papers, getting ready to a move to northern Virginia with her husband (no, he is not the boyfriend of 1994) and two children. Being a creative soul, she likes to keep things that might prove useful in future collages or stories or who-knows-what. Sorting through her stuff, she found this card she received from me while she was in Colorado. It had a "pome" I wrote for her, inspired by the picture.

I imagined her waiting for a letter from "John", who was then living in Ocean City, on what we Marylanders call "the Eastern Shore." I call it a "pome" because it's kind of silly, with lame plays on words. She and her boyfriend were both fans of Lou Reed. I had to ask her who Lou Reed was and so she played me a recording. Forgive me, but I did not think the man could sing.

Hope rising like the sun,
She waits by the morning door.
Perhaps they will come today--
The long-awaited words
From the Eastern Shore.

She waits
A long, long time,
A long, long longing time.
Perhaps he will come today,
Bringing the long-awaited words
From the Eastern Shore.

A letter not addressed to her,
But promised none the less.
A long, long letter
That she longs to read.
(Lou Reed would like
To read it, too,
But the promise was not
Made to him.)

Doubt stirs the curtains of her mind
Like the morning breeze.
Perhaps they will not come today,
Those long-awaited words,
And so hope dies of a day,
But it will rise again with tomorrow's sun.

STUMPHENGE: One Week to Go! 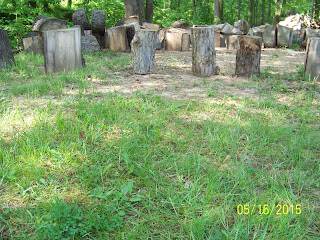 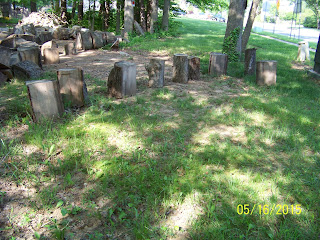 A tribe of elves has been at work on STUMPHENGE near our house in Laurel, MD. They are hauling massive wooden stumps on sledges over a great distance. No one knows why they have undertaken this monumental project, but their idea is to have it finished by the Summer Solstice, which is one week from tomorrow. Apparently, their project has something to do with seasons, crops and stuff. 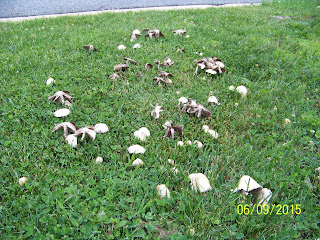 Just one of the three workers' villages lying close to Stumphenge.
Posted by Forsythia at 9:49 AM 1 comment:

Email ThisBlogThis!Share to TwitterShare to FacebookShare to Pinterest
Labels: This World of Dew

I keep hearing about this guy named Step Ladder who is mixed up in the world soccer association mess.
Posted by Forsythia at 7:34 AM 1 comment: