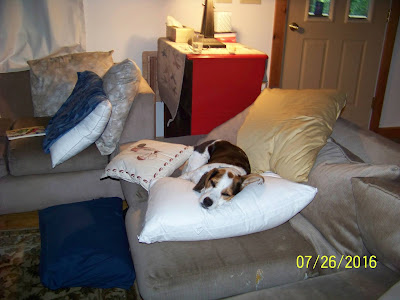 He looks so innocent. And mostly, he is. He can be affectionate and cuddly. Put him on a leash, though, and he turns into a monster.

He's our daughter's dog. A beagle. When she, her husband and two children flew to California to spend Christmas with Tom's family, they left Roscoe with us. My husband had just had knee surgery, so it was my job to walk both dogs every day. I had two daily routes mapped out:  a long one and a short one. In the interest of fairness, I planned to take one or the other on the longer walk every other day. That didn't work out. I soon found that Roscoe was just too much dog for me. Even taking him on the short walk just wore me out.

The dog dragged me along, constantly zig-zagging from side to side,  apparently following a scent.  He'd become breathless with excitement, emitting little yips.  Every few minutes--or so it seemed--he'd erupt into a full-throated bellow, trumpeting the news to his imaginary pack that he had scented a squirrel. It was embarrassing! How could a slender 25-pound dog make such a racket?

On New Year's Day,  his people returned. It was none too soon. His leash and kibble were packed before they even got here from the airport. "Oh, he was no trouble at all," I said as they all piled into their car for their journey home.
Posted by Cynthia at 3:31 PM 13 comments:

Email ThisBlogThis!Share to TwitterShare to FacebookShare to Pinterest
Labels: Roscoe 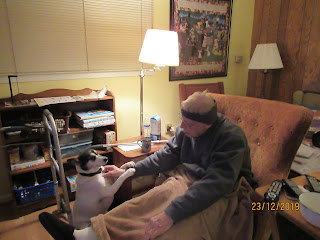 Dilly-Dog wonders why her best friend sits around in a chair all day.

He finally did it. He got the other knee replaced on December 19th.  He'd mulled it over for a long time.  Over five years, I think. He'd had knee-replacement surgery on his left knee in August,  2014. It went well and everyone in the family just assumed he'd have the other knee done before too long.  Well, we were wrong. The motto this man lives by is: "We don't have to decide today."

Many todays went by.  Eventually,  he decided to accept his knee "as is." He could get around just fine, he said.  OK, he limped a little, but all in all, his knee wasn't a problem. Besides, he'd heard some stories about knee surgeries that hadn't gone well. Then he bought a bike and was soon riding all over the neighborhood, gradually extending the distance and trying some hills.  He and his "bad" knee were out there nearly every day, enjoying the fresh air and sunshine.  Life was good.

Perhaps it was during our trip to Costa Rica last spring that he began to reconsider knee surgery. We did a lot of walking. Usually, he had no problem, unless we had to rush through an airport to make a connection or climb a steep flight of stairs. In May, he said he wanted to talk to a surgeon. Once he decided on surgery, he wanted to have it right away, because the surgeon was planning to go on maternity leave by the end of summer.  But a day or two after their initial meeting, she called to tell him her obstetrician wanted her to stop working immediately.

So, with one thing and another, it was nearly Christmas before he had his surgery.  Recovery is going well. He's getting PT three times a week and is eager to resume a more active life--walking the dog, riding his bike and driving. After all, you can watch only so much football, listen to only so many talking heads, binge-watch only so many programs on Netflix before you go absolutely B*A*T*T*Y.
Posted by Cynthia at 3:57 PM 9 comments: