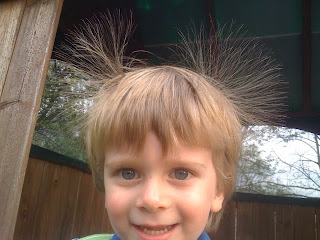 This morning we went to The Diner for breakfast. Through the window, we saw the cook step outside to smoke. To our surprise, he proceeded to roll his own cigarette. I didn't know people still did that. He poured just the right amount of loose tobacco into a thin, white paper.  Jiggled it around  to even things out, rolled it, licked the edge of the paper, sealed it deftly and settled down for a few moments of bliss. Many a time I watched Uncle Earl do this very thing when I was a kid.
Uncle Earl.
What a character.
He and "Cousin Carl" lived at "Whitehaven," the farm my natural mother's parents bought during the Depression. Aunt Nancy said, "I never thought anything about it. I thought everyone kept a couple of freaks around the house."
Freaks? That seems a bit harsh. Earl and Carl both drank. My grandfather took them in, hoping to keep them out of trouble. It didn't work for Carl, but Uncle Earl did fine, as long as he didn't go to town.
Uncle Earl was a frail, little old man with a fringe of white hair. He slept in a monks' cell of a  bedroom on the first floor near the kitchen.  He'd spend hours in his room, playing solitaire on a rickety, blue table with scorch marks along the edge, where he'd set countless hand-rolled cigarettes.  He never had much to say, other than to good-naturedly call my sister and me "a couple of bad eggs." Sitting on the covered radiator in the "breakfast room," smoking one of his cigarettes, he'd churn butter in a gallon-sized glass jug fitted out with a crank. He'd crank and crank until butter began to appear on the paddles. One thing that Uncle Earl took great pride in was his beautiful vegetable garden. He wouldn't pick the corn until Grandmother had the water  boiling.
Grandmother said that Uncle Earl was awfully smart. She told me that, at Allegheny College,  Uncle Earl often took exams for a lazy classmate who later became a judge in Crawford County. Unfortunately, Uncle Earl didn't graduate. Something about getting drunk and putting a cow in the bell tower of Alden Hall. I wish now that I'd listened more carefully to Grandmother's stories.
Who knows how close he came to ruin before he tried a "geographical cure?' What happened to Uncle Earl when he went to town? One time he accompanied Grandmother to Cambridge Springs on a grocery-shopping trip. He was supposed to drop off the vacuum cleaner at the repair shop. Not only did he drop it off, but he also dropped out of sight for two or three weeks. That's what could happen when Uncle Earl went to to town.
Posted by Cynthia at 5:20 PM 1 comment: 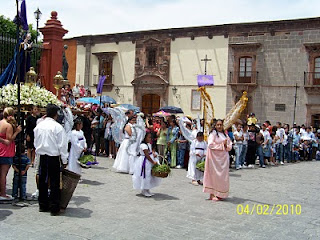 Click on photo to see angelic flip-flops.
We're back from a week in San Miguel de Allende. We happened to be there during Holy Week. We saw three magnificent religious processions. Here is the beginning of the second procession that took place on Good Friday, an hour-long re-enactment of the crucifixion. 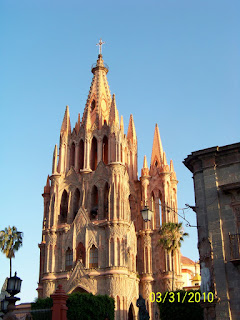 The procession began at La Parroquia de San Miguel Arcangel (The Parish of Saint Michael the Archangel), a most unusual church that dominates the Jardin Principal (town square), if not the whole state of Guanajuato.
I don't have much more to say right now. I fell in love, that's all.
It's been chaotic, in a good way, since we've come home. Our younger daughter, husband, and two-year-old "house-sat" while we were away. While we were gone, a major leak developed in the bathroom at their house. They've had to extend their stay. The repairman expects to be finished in time for them to return home tomorrow night. Meanwhile, the refrigerator is so full of stuff I can't find a thing. Laundry baskets and suitcases are stacked up everywhere. I've been to the supermarket a few times and done some laundry, theirs and ours. Sophie, their dog--the one I fell over when I broke my leg--barreled through  the porch screen, creating a portal to the Great Outdoors for Georgie, our indoor cat. Georgie didn't go very far, but she looked all too pleased to have "escaped" for a few moments.
I still have one foot in Mexico and vague plans to take Beginning Spanish.
Posted by Cynthia at 10:18 AM 4 comments: