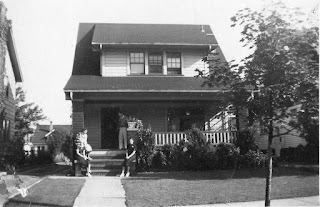 Some years ago, my husband was back in Cleveland, OH. He decided to visit his childhood home. He was born in that house in 1939 and it was home to him and his siblings until he left for college in 1957. After his father retired in the mid-60's, his parents sold the house and moved to the old farmhouse they owned in Knox County, OH.
The house was in Garfield Heights, a Cleveland suburb. While he was growing up, P's neighbors were all White people, largely of Irish and eastern European origin. His parents had a party line, so P often picked up the phone to hear his next-door neighbor talking in Czech. One day, thinking she might suspect he was eavesdropping, he quickly hung up when he heard her say the word, "telephone".

P knew that the neighborhood had changed and that the house now belonged to a Black family, so he wasn't sure how welcome he'd be if he approached the owner. Noticing that the yard looked better than it had back in his day, he knocked on the front door. A middle-aged woman answered the door. From upstairs, what sounded to P like "a crabby old lady"--her mother?--called down to her: "Who's at the door?"

"It's OK," the woman replied to the old lady. P explained that he had grown up in the house. The woman was very friendly. She asked him to step inside. They chatted a bit, and then she asked, "While you're here, there's something I've always wondered about. There's a bump on the floor in the basement that looks like it's been covered over with cement. Do you know anything about that?"

Always quick on the draw, P replied, in an ominous tone, "Don't dig there!"

"What???" The woman was clearly horrified.

"Just kidding," he said, reassuringly. "Actually, I have no idea. That must have happened after we moved out."

Posted by Forsythia at 4:00 PM

Email ThisBlogThis!Share to TwitterShare to FacebookShare to Pinterest
Labels: Out and About