A Little Extra Excitement at the 50th Reunion

So we went to my husband's 50th reunion at the College of Wooster, or at least to part of it. The big dinner on Saturday night was supposed to be a formal affair. The Tree Hugger said, "No way."  So we settled on the late-Friday-afternoon patio picnic. We met up with a couple of old classmates and were having a great time at our table in the big, white tent when a woman came up and said, "Please pick up your plates and follow me."
Over 100 members of the class of '61 and their spouses crowded into the basement of the nearby Lowry Center to wait out a tornado warning. The TV weather map showed tornados threatening to touch down here and there north of Wooster. The sky grew black and the wind blew. Buckets of rain fell. We were down there for about an hour, until the danger was past.
The storm continued after the warning was over. Phil and I headed back to our cabin in Knox County, certain that Ramsey and Violet (two elderly dogs) were in a state of panic. Lightening flashed across the sky all the way. The dogs seemed fine, although they had unmade our bed.
Phil spent most of the rest of the weekend planting three American chestnut seedlings, which he received from the American Chestnut Foundation. The weather turned from muggy to cool after the storm, which should give the seedlings a good start. 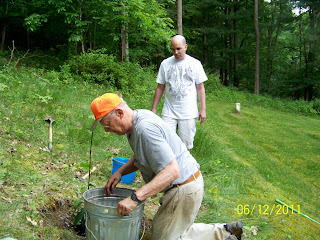 Phil and nephew-in-law, Pat, planting a chestnut tree
Posted by Cynthia at 11:22 AM 2 comments:

We just spent some money on new siding and a new roof for the house. I decided I could not go up on a ladder to deal with the mold on the bedroom ceiling, so we had our bedroom and bathroom painted professionally. "Antique white" turned out to be a warm, peachy color. Love it!
Next we ordered honeycomb blinds for our two bedroom windows and two windows in the guest room. Here's where the house-project train, which had been rolling along smoothly, jumped the track. At the last minute, something or someone (the devil?) whispered "room-darkening" in my ear. So that's what I ordered. Room-darkening honeycomb shades in pearl white. Except that when they were installed, they looked grime-grey. I wanted "airy and cheerful," but I got "doom and gloom".
HIDEOSO!!!
I can't live with these things. They look like a sooty Russian town near the Arctic Circle in February.  Archangel maybe?  They's bought- n-paid for. I hate them. What to do?
My sister says to just get rid of them. I think she's right. First, I will try to sell them, and if there are no takers, then I will give them away.
Posted by Cynthia at 7:35 AM 4 comments: