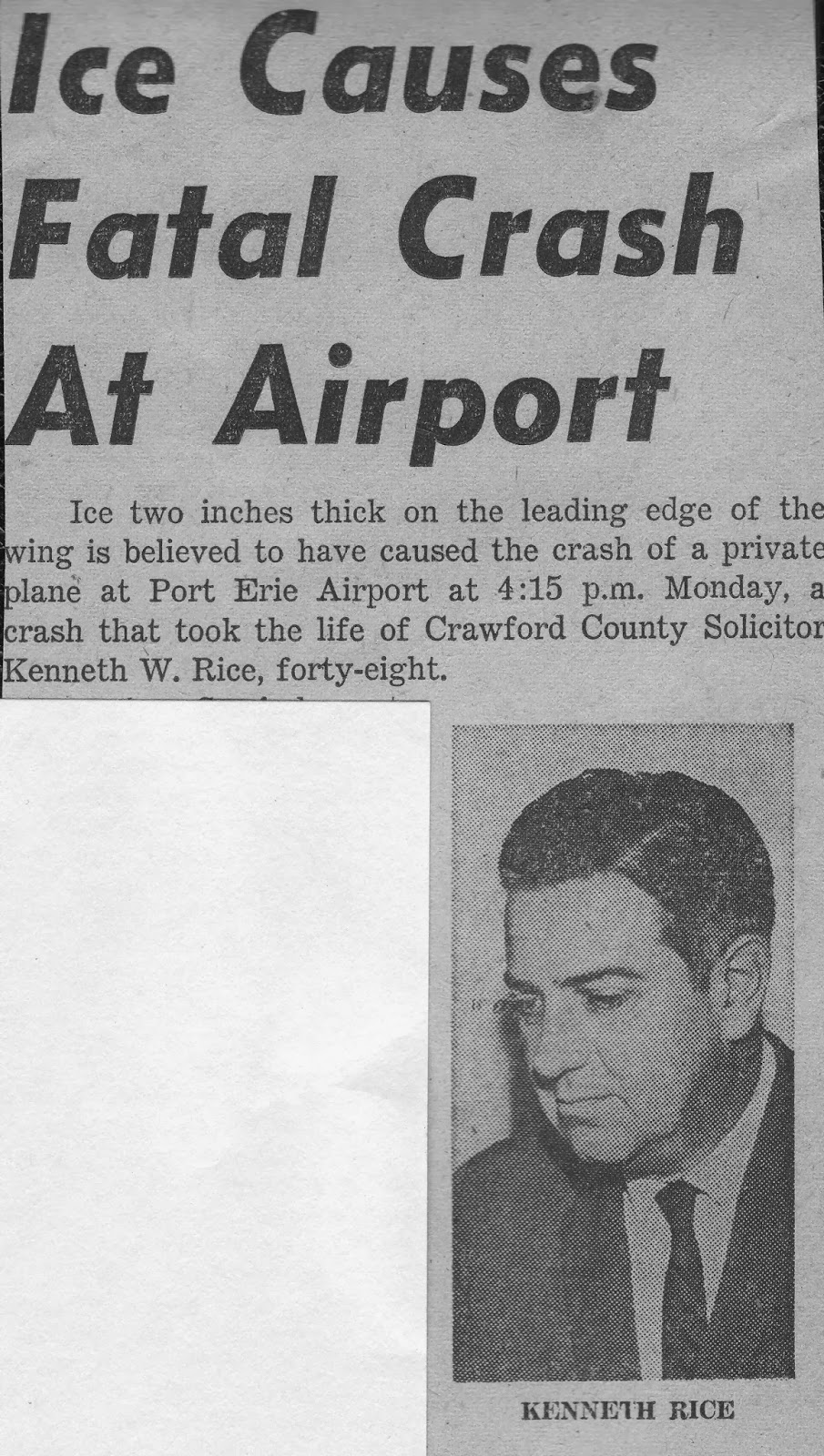 Fifty two years ago this month, I was at college when I went down to a phone booth in the dorm basement to take a phone call from my mom. "Papa has been killed in a plane crash," she said. I screamed and cried all the way back up to my room. My friends were waiting for me there, sitting on the beds and looking so sad.

Dad was a successful small-town lawyer in Meadville, PA, the county seat. He was also the attorney for a small company. During the last weekend of January, against his better judgement, he and Eddie D., the company vice-president, flew to Buffalo on business in the small company plane. On the way home, Roger, the pilot, attempted a landing at Port Erie Airport, but the plane suddenly dipped and crashed. Ice on the wings were believed to have brought the plane down.

Later, when Mom was talking about the accident, she said, "Papa was killed, Eddie was badly banged up, and Roger was--"

"Drinking." I finished Mom's sentence for her. Mom looked surprised. "Why, no," she said. "Where did you get that idea?"

It made complete sense to me.  It was beginning to look to me as if nothing was ever done in that town without a drink. On his last Christmas,  Dad kept good-naturedly badgering Aunt Edna all afternoon: "Let's you and me go into the kitchen and cement our friendship." Normally, they had little to say to each other, but that day Edna tee-heed every time he suggested a drink and off they'd go to the kitchen.

Getting drunk was normal, expected and lots of fun. Growing up during Prohibition probably shaped that whole generation's attitudes about drinking. They were in their 20's when Prohibition was repealed in 1933. No one in their crowd was ever an "alcoholic," except for one man, our family dentist. Everyone agreed that he'd been the one with the problem, especially after he slipped and fell on the ice on his front porch and died.

He was the alcoholic, but everyone else was just relaxing and having fun. My dad's friend, who thought church was just for women and children,  prided himself on giving up hard liquor for Lent. Even my dad cut back during court season. I had an artifact of that era that I now wish I hadn't thrown out. It was an ice bucket with a half dozen cartoon scenes of drunken fun. One red-nosed couple stood at an open door holding out measuring cups. The caption read, "We'd just like to borrow a cup of whiskey." My dad received a birthday card facetiously crediting booze for the relatively long lives of human beings compared to animals. One line said, "The horse at twenty cashes in without the aid of rum or gin." And then there were songs on old 78 rpm records: "Don't roll your bloodshot eyes at me. I can tell you've been out on a spree."

One couple in my parents' crowd brought scorn down on their heads by trying to ration the drinks. Everyone had gathered at their house one evening before going to the club for dinner. The K's announced that they would like some "intelligent conversation" for once. They were limiting their guests to two cocktails apiece. Months later, people were still laughing and shaking their heads at the K's misguided attempt to change the rules.

A Japanese proverb says, "First a man takes a drink. Then the drink takes a drink. And then the drink takes the man." Toward the end of his life, my dad's hard-drinking friends started to worry that he had "lost control." As if he'd ever had it. He'd been collecting citations for driving under the influence, but was always let off with a warning because of his position in the community. Then a policeman came to the door after midnight to tell Mom he had found Dad's car at the side of the road, lights on, engine running, door open, no Dad. They found him eventually. Then there was the time Dad embarrassed himself during a radio broadcast of the town meeting. Opposed to annexing West Mead township to the city of Meadville,  he attacked his opponent in a drunken rant.  He was mortified the next morning when Mom repeated to him some of the things he'd said.

Mom herself was tiring of the perpetual weekend parties. She told me about Dr. and Mrs. C's holiday buffet. Mrs. C had set a beautiful table, using her best china. When someone stumbled into corner of the table, the leg gave way and the table sagged. As if on cue, the guests began gleefully flinging around the food and the dishes, not stopping until they'd totally trashed everything on the table.

So there was my Dad lying in that coffin in midwinter. The quilt looked warm and comforting, with pictures of pheasants rising in flight. Dad would have liked that. The son of a barkeeper and pool hall owner, he had done the things he thought well-off people did, playing golf in the summer, shooting skeet in the fall, and enjoying fine whiskey. Seeing him there, Mom said, sadly, "He looks just like a little boy."  We both knew that his chances of overcoming his drinking problem had been nil. Perhaps this was for the best.

Is Your Refrigerator Running?

Remember in the good ol' days before Caller ID, you'd get a phone call at least once a year from the neighborhood teen-ager:

Teen-ager:  Is your refrigerator running?
Gullible me: Gosh, I think so.
Teen-ager: Better catch it before it gets away.

Nowadays we get calls from techno-impersonators wanting to help us with non-existent computer problems:

Caller: We see error message coming from your computer.
Husband: Oh, really?
Caller: We need information to fix problem.
Husband: You sound funny. What's your native language?
Caller: English.
Husband: Where are you calling from?
Caller: Brooklyn.
Husband: Brooklyn, huh? What's the weather like there?