The Nursery is Ready 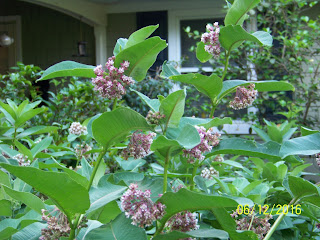 Last year we planted milkweed so that monarch butterflies could lay their eggs. All that we knew about monarch butterflies at that time is that baby monarchs require milkweed. Unfortunately, we didn't see a single monarch all summer. Then we found out that sometimes you have to order butterfly eggs from a vendor. We found a vendor, but the eggs--often available as early as June--will not be available until mid-July. No orders will be accepted until then. We are waiting, waiting, waiting.
Posted by Cynthia at 7:19 AM 1 comment:

We were back at the beach in Lewes, DE the week of June 18th with our daughter, son-in-law and 13-year-old grandson.  The weather was heavenly, but we had some brief moments in hell. 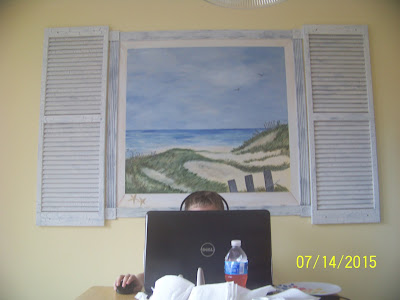 Last year, when my daughter suggested a trip to one of her favorite shops, "Christmas Tree Hill," I thought she said "Christmas Tree Hell." It was another "fun-with-hearing-loss"moment. The family mascot was then 12 and spent nearly the whole week playing video games (with earphones) with occasional breaks for fishing or swimming. This year, when  his mother asked him to go with us to Christmas Tree Hill, he replied, "Why would I want to go to Christmas Tree Hell?" Did he hear her wrong because of a new testosterone-driven aversion to shopping? He stayed home, but my husband, daughter and I went to "Hell." Actually, my husband didn't venture into the store. He sat on a bench outside, watching the passers-by.

When the week was over, I rode home with Margaret. We stopped at an outlet mall to shop for shoes before getting on the Chesapeake Bay Bridge, because Margaret needed some shoes. As luck would have it, I found two pairs I liked and she found none. Returning to the car, she fished in her bag for her keys.


What a heart-stopping moment! Of course she could have called Michael and of course  he would have turned right around, but he would have been grumpy. We returned to the store and asked if anyone had turned in a set of keys. No one had, so we scanned the aisles for the keys. A clerk suggested Margaret had dropped them in a shoebox. The shelves were lined with hundreds of identical shoeboxes. "Uh, I don't think so," said Margaret. The clerk advised her to go to the mall security office, so Margaret took off, half running. As I headed for the parking lot to look for the keys, I heard the clerk calling me. She was waving the keys.  She'd remembered that Margaret had tried on a certain pair of navy-blue sandals. She found the keys in the box.

So now we joined the bumper-to-bumper traffic headed for the Chesapeake Bay Bridge. On the bridge, Margaret drove in the middle lane. I was impressed with her bravery. I always choose the outer lane because I don't like being tail-gated by drivers who think the posted speed limit is for sissies. I concentrated on the distant sailboats out on the water and tried not to think of the woman whose car was nudged over the railing by an aggressive truck driver last year. Fortunately, the accident happened soon after she got on the bridge, so she didn't fall all that far and she was able to swim to safety.