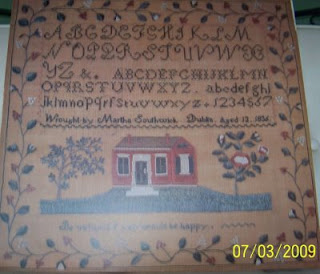 Our niece gave us a framed needlework sampler for our cabin in Ohio. It wasn't exactly a gift, just something she couldn't use and thought we'd like. Wanting to keep the cabin spare and bare, I donated it to a silent auction fundraiser back home in Maryland, estimating its value at $150.00.

A few days before the June 6th auction, I typed "sampler" in my browser window on a whim and was amazed to discover that 19th century samplers were coveted by collectors of antique needlework and fetched prices ranging from $90.00 to $38,000.00. Our sampler was "wrought" in 1836 by Martha Southwick of Dublin, NH, when she was 13 years old. I quickly withdrew our donation from the auction so that we could have it appraised. I sent a few inquiries to online appraisers. This week, I learned from a 1982 New York Times article that our sampler, part of a estate of a serious collector, was valued at $4500.00 over 25 years ago.

"Visions of sugarplums danced in our heads."

Skepticism soon began gnawing away at my euphoria. Yesterday, I typed “Martha Southwick sampler” in my browser window. A picture of “our” sampler came up as an art print or poster available from 35 online dealers. Next, I visited a Southwick genealogy site and found two messages addressed to Martha's descendants, posted in 2001. One was from a woman interested in selling her art print and the other was from a man who had an actual sampler. He thought he might have the original. Silly man.

By now, we had come to the sad realization that we most certainly did NOT have the original either, but I hoped that what we had was at least a reproduction. However, no Martha Southwick sampler showed up on the many websites that sell sampler reproduction kits. Phil was pretty sure that we had an art print. By 9:30 last night, I could stand the suspense no longer. We gingerly peeled back the paper sealing the frame so as not to damage the hoped-for cloth, and found that what we have is--TA-DA-- an art print. It’s a very good print, because it appeared like real cloth and yarn when viewed through the glass.

I think we’ll hang our sampler in the cabin after all.
Posted by Cynthia at 3:15 PM